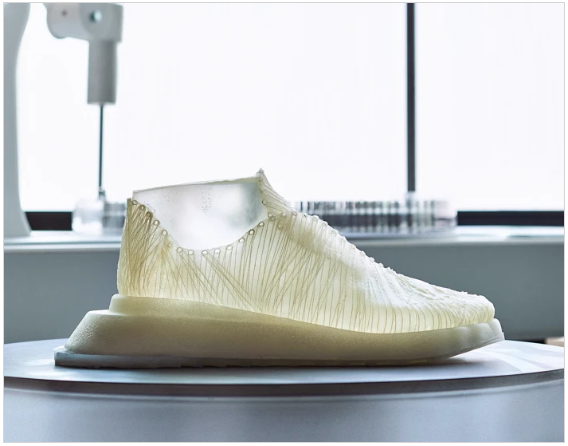 For Hermes, the Greek god of speed, these bacterial sneakers would have been just the ticket. Modern Synthesis co-founders Jen Keane, CEO, and Ben Reeve, CTO, are now setting out to make them available to mere mortals, raising a $4.1 million investment to scale up production. Keane, a graduate from Central Saint Martins School of Art and Design in London, and synthetic biologist Reeve, then at Imperial College London, set up Modern Synthesis in 2020 to pursue ‘microbial weaving’.

Their goal is to produce a new class of material, a hybrid/composite that will replace animal- and petrochemical-made sneakers with a biodegradable, yet durable, alternative. The shoe's upper is made by bacteria that naturally produce nanocellulose—Komagataeibacter rhaeticus—and can be further genetically engineered to also self-dye by producing melanin for color.

The process begins with a two-dimensional yarn scaffold shaped by robotics, which the scientists submerge in a fermentation medium containing the cellulose-producing bacteria. The K. rhaeticus ‘weave’ the sneaker upper by depositing the biomaterial on the scaffold. Once the sheets emerge from their microbial baths, they are shaped on shoe lasts following traditional footwear techniques. “It’s more than the sum of its parts,” Reeves says of the biocomposite. “Initially the scaffold helps the bacteria grow, then the microbial yarn reinforces the material: it holds the scaffold together.” Once the shoe is made, it is sterilized and the bacteria are washed out.