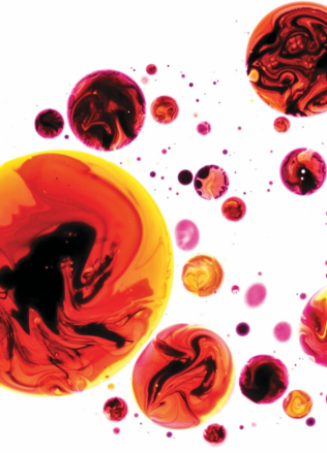 A major challenge in cell biology remains to unravel is how cells control their biochemical reaction cycles. For instance, how do they regulate gene expression in response to stress? How does their metabolism change when resources are scarce? Control theory has proven useful in understanding how networks of chemical reactions can robustly tackle those and other tasks.1 The essential ingredients in such approaches are chemical feedback loops that create control mechanisms similar to the circuits that regulate, for example, the temperature of a heating system, the humidity of an archive, or the pH of a fermentation tank.

Theories for the control of biochemical reactions have largely focused on homogeneous, well-stirred environments. However, macromolecules inside cells are often highly organized in space by specialized subunits called organelles. Some organelles, such as the cell nucleus, are bound by a membrane. By contrast, another class of organelles—biomolecular condensates—show the hallmark physical properties of liquid-like droplets, and they provide chemically distinct environments for biochemical reactions.2–4

Such droplets can act as microreactors for biochemical reactions in a living cell (see figure 1). Their liquid nature sustains the fast diffusion of reactants while their specific composition gives rise to the partitioning of reactants in or out of the droplets. In general, the concentrations of reactants inside condensates differ from the concentrations outside. Those differences modify reaction fluxes, which, in turn, can dramatically affect reaction yield and other properties of chemical reactions. Just how such modified fluxes govern the biochemistry inside cells remains poorly understood.