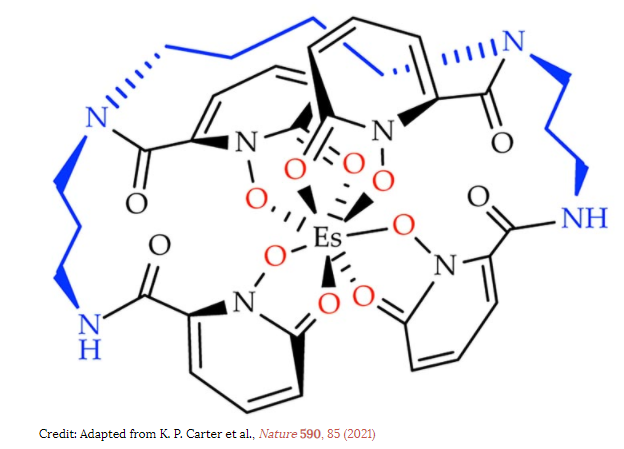 To date, researchers have created more than two dozen synthetic chemical elements that don’t exist naturally on Earth. Neptunium (atomic number Z = 93) and plutonium (Z = 94), the first two artificial elements after naturally occurring uranium, are produced in nuclear reactors by thousands of kilograms. But the accessibility of transuranic elements drops quickly with Z: Einsteinium (Z = 99) can be made only in microgram quantities in specialized laboratories, fermium (Z = 100) is produced by the picogram and has never been purified, and all elements after that are made just one atom at a time.

There are ways to probe the atomic properties of elements produced atom by atom (see, for example, Physics Today, June 2015, page 14). But when it comes to the traditional way of investigating how atoms behave—mixing them with other substances in solution to form chemical compounds—Es is effectively the end of the periodic table.

Now Rebecca Abergel (head of Lawrence Berkeley National Laboratory’s heavy element chemistry program) and her colleagues have performed the most complicated and informative Es chemistry experiment to date. They chose to react Es with a so-called octadentate ligand—a single organic molecule, held together by the backbone shown in blue, that wraps around a central metal atom and binds to it from all sides—to create the molecular structure shown in the figure. In their previous work, Abergel and colleagues used the same ligand to study transition metals, lanthanides, and lighter actinides. When they were fortunate enough to acquire a few hundred nanograms of Es from Oak Ridge National Laboratory, they used it on that as well.