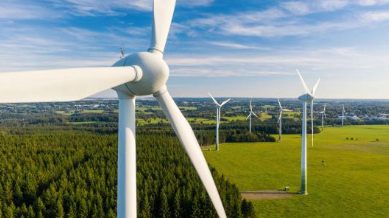 Clean energy sources like wind turbines are part of Argonne’s decades-long effort to create a carbon-free economy. (Image by Shutterstock/Engel.ac.)

Reducing carbon dioxide emissions and removing them from the atmosphere is critical to the global fight against climate change. Called decarbonization, it is one of the focal points in the nation’s strategy to ensure a bright future for our planet and all who live on it.

The U.S. Department of Energy’s (DOE) Argonne National Laboratory has been at the forefront of the quest to decarbonize the U.S. economy for decades.

Argonne scientists are developing new materials for batteries and researching energy-efficient transportation and sustainable fuels. They are expanding carbon-free energy sources like nuclear and renewable power. Argonne researchers are also exploring ways to capture carbon dioxide from the air and from industrial sources, use it to produce chemicals, or store it in the ground.

The ultimate goal? To reduce the greenhouse gases that trap heat in the atmosphere and warm the planet.