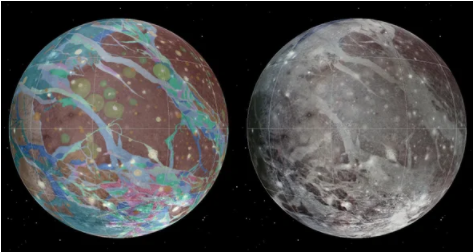 Ganymede, get ready for your close-up.

No probe has gotten a good view of Jupiter’s largest moon since 2000 when NASA’s Galileo spacecraft swung past the strange world, which is the largest moon in the whole solar system. But on Monday (June 7),  at 1:35 p.m. EDT (1735 GMT), NASA’s Juno spacecraft will skim just 645 miles (1,038 kilometers) above Ganymede’s surface, gathering a host of observations as it does so.

“Juno carries a suite of sensitive instruments capable of seeing Ganymede in ways never before possible," principal investigator Scott Bolton, a space scientist at the Southwest Research Institute in San Antonio, said in a NASA statement. “By flying so close, we will bring the exploration of Ganymede into the 21st century.”

Ganymede is a fascinating world for scientists. Despite its status as a moon, it’s larger than the tiny planet Mercury and is the only moon to sport a magnetic field, a bubble of charged particles dubbed a magnetosphere. Until now, the only spacecraft to get a good look at Ganymede were NASA’s twin Voyager probes in 1979 and the Galileo spacecraft, which flew past the moon in 2000.