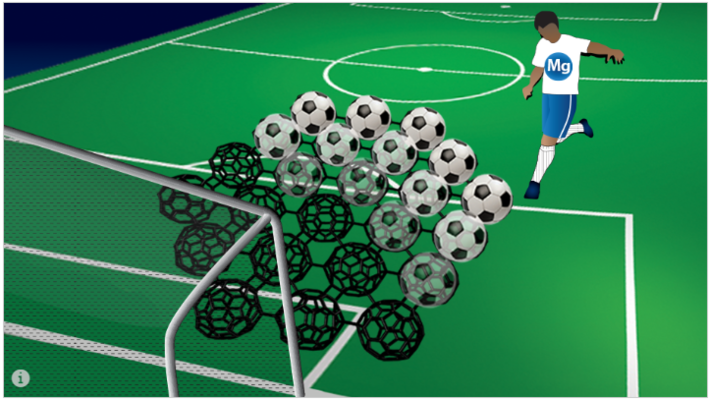 Graphullerene, an atom-thin material made of linked fullerene subunits, gives scientists a new form of modular carbon to play with.

Carbon, in its myriad forms, has long captivated the scientific community. Besides being the primary component of all organic life on earth, material forms of carbon have earned their fair share of breakthroughs. In 1996, the Nobel Prize in Chemistry went to the discoverers of fullerene, a superatomic symmetrical structure of 60 carbon atoms shaped like a soccer ball; in 2010, researchers working with an ultra-strong, atom-thin version of carbon, known as graphene, won the Nobel Prize in Physics.

Today in work published in Nature, researchers led by Columbia chemists Xavier Roy, Colin Nuckolls, and Michael Steigerwald, with postdoc and first author Elena Meirzadeh have discovered a new version of carbon that sits somewhere in between fullerene and graphene: graphullerene. It’s a new two-dimensional form of carbon made up of layers of linked fullerenes peeled into ultrathin flakes from a larger graphullerite crystal—just like how graphene is peeled from graphite crystals (the same material found in pencils).

“It is amazing to find a new form of carbon,” said Nuckolls. “It also makes you realize that there is a whole family of materials that can be made in a similar way that will have new and unusual properties as a consequence of the information written into the superatomic building blocks.”