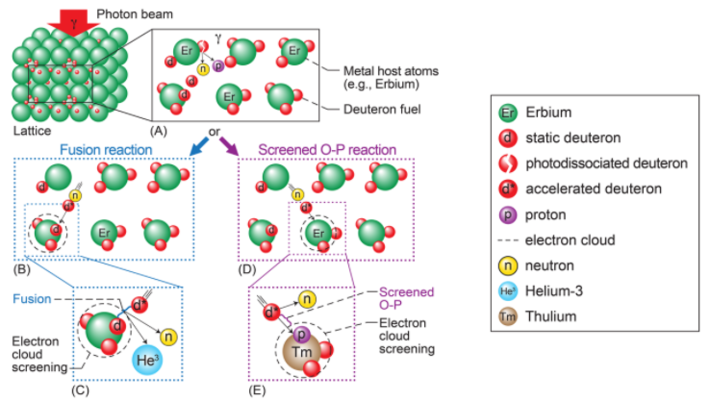 Illustration of the main elements of the lattice confinement fusion process observed. In Part (A), a lattice of erbium is loaded with deuterium atoms (i.e., erbium deuteride), which exist here as deuterons. Upon irradiation with a photon beam, a deuteron dissociates, and the neutron and proton are ejected. The ejected neutron collides with another deuteron, accelerating it as an energetic “d*” as seen in (B) and (D). The “d*” induces either screened fusion (C) or screened Oppenheimer-Phillips (O-P) stripping reactions (E). In (C), the energetic “d*” collides with a static deuteron “d” in the lattice, and they fuse together. This fusion reaction releases either a neutron and helium-3 (shown) or a proton and tritium. These fusion products may also react in subsequent nuclear reactions, releasing more energy. In (E), a proton is stripped from an energetic “d*” and is captured by an erbium (Er) atom, which is then converted to a different element, thulium (Tm). If the neutron instead is captured by Er, a new isotope of Er is formed (not shown).

A team of NASA researchers seeking a new energy source for deep-space exploration missions recently revealed a method for triggering nuclear fusion in the space between the atoms of a metal solid.

Nuclear fusion is a process that produces energy when two nuclei join to form a heavier nucleus. “Scientists are interested in fusion because it could generate enormous amounts of energy without creating long-lasting radioactive byproducts,” said Theresa Benyo, Ph.D., of NASA’s Glenn Research Center. “However, conventional fusion reactions are difficult to achieve and sustain because they rely on temperatures so extreme to overcome the strong electrostatic repulsion between positively charged nuclei that the process has been impractical.

Called Lattice Confinement Fusion, the method NASA revealed accomplishes fusion reactions with the fuel (deuterium, a widely available non-radioactive hydrogen isotope composed of a proton, neutron, and electron, and denoted “D”) confined in the space between the atoms of a metal solid. In previous fusion research such as inertial confinement fusion, fuel (such as deuterium/tritium) is compressed to extremely high levels but for only a short, nano-second period of time, when fusion can occur. In magnetic confinement fusion, the fuel is heated in a plasma to temperatures much higher than those at the center of the Sun. In the new method, conditions sufficient for fusion are created in the confines of the metal lattice that is held at ambient temperature. While the metal lattice, loaded with deuterium fuel, may initially appear to be at room temperature, the new method creates an energetic environment inside the lattice where individual atoms achieve equivalent fusion-level kinetic energies.