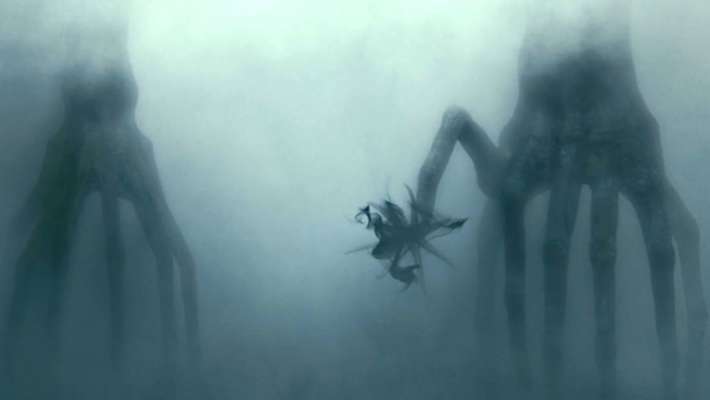 The depiction of tentacled extraterrestrials (above) in the recent science-fiction film, "Arrival, "indicates divergence from aliens reported by supposed eyewitness accounts. Paramount. Source: Wrinkles, tentacles and oval eyes: How depictions of aliens have evolved, CNN Style

In my freshman seminar at Harvard last semester, I mentioned that the nearest star to the sun, Proxima Centauri, emits mostly infrared radiation and has a planet, Proxima b, in the habitable zone around it. As a challenge to the students, I asked: “Suppose there are creatures crawling on the surface of Proxima b? What would their infrared-sensitive eyes look like?” The brightest student in class responded within seconds with an image of the mantis shrimp, which possesses infrared vision. The shrimp’s eyes look like two ping-pong balls connected with cords to its head. “It looks like an alien,” she whispered.

When trying to imagine something we’ve never seen, we often default to something we have seen. For that reason, in our search for extraterrestrial life, we are usually looking for life as we know it. But is there a path for expanding our imagination to life as we don’t know it?

In physics, an analogous path was already established a century ago and turned out to be successful in many contexts. It involves conducting laboratory experiments that reveal the underlying laws of physics, which in turn apply to the entire universe. For example, around the same time when the neutron was discovered in the laboratory of James Chadwick in 1932, Lev Landau suggested that there might be stars made of neutrons. Astronomers realized subsequently that there are, in fact, some 100 million neutron stars in our Milky Way galaxy alone—and a billion times more in the observable universe. Recently, the LIGO experiment detected gravitational wave signals from collisions between neutron stars at cosmological distances. It is now thought that such collisions produce the precious gold that is forged into wedding bands. The moral of this story is that physicists were able to imagine something new in the universe at large and search for it in the sky by following insights gained from laboratory experiments on Earth.

How to Search for Life as We Don't Know It, Avi Loeb, Scientific American