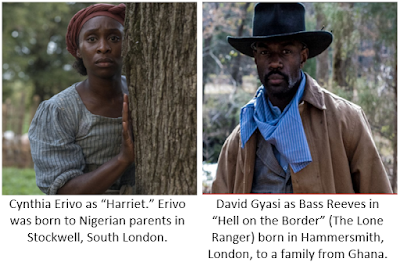 For ONCE, this isn't about the self-destructing Orange Satan. There will be ample material next Friday, as his downward spiral continues.
That doesn't mean I'm not concerned with our republic. Public impeachment hearings begin next Wednesday, broadcast on every network, including the conservative ones. That being said, the most dangerous animal in the world is man, and like any, is most dangerous when cornered. The scene from the Sons of Jacob takeover is disturbingly instructive. The question is, would Ayn Rand self-centered capitalism even CARE if we lost our democracy as long as stocks continue trading between 9:30 am - 4:00 pm EST?

The conniption fits about African American actress Halle Bailey playing the Little Mermaid were humorous and disturbing. It reminded me of the controversy over NK Jemisin winning the Hugo and Nebula Awards for science fiction...because she's African American. A whole community - self-described as "rabid puppies" and sad puppies eventually were bequeathed the apropos label: "snowflakes."

A term for someone that thinks they are unique and special, but really are not. It gained popularity after the movie "Fight Club" from the quote “You are not special. You're not a beautiful and unique snowflake. You're the same decaying organic matter as everything else."

Began being used extensively as a put down for someone, usually on the political left, who is easily offended or felt they needed a "safe space" away from the harsh realities of the world, but now has morphed into a general put down for anyone that complains about any subject.

1. Ahem: mermaid's aren't real. o_9 The fact that humanity came from what we now know as the continent of Africa can be verified as can the political creation of so-called "white" people in 1681.
2. The legend of mermaids was probably based on the manatee (which doesn't look attractive at all, except to other manatees) and drunken, horny sailors that hadn't seen land or women in a while.
3. Atlantis is fiction, as is Aquaman and Namor, depending on which comic book series you followed. There are hidden worlds and undersea organisms we're discovering every year, yet we haven't discovered Atlantis, mermaids, mermen, Big Foot, the Loch Ness monster, unicorns or leprechauns.

I posted several trailers for "Harriet" played by British actress Cynthia Erivo and screenplay co-written by Kasi Lemmons, an African American woman who also directed the film.
In real life, Cynthia Erivo dates actor Dean John-Wilson, an aforementioned so-called white guy. English society has its issues (see: Brexit). However, manumission in eighteenth century England wasn't followed up with black codes, lynchings and Jim Crow. Also, English actors have played American parts before - Christian Bale played Bruce Wayne in the Dark Knight trilogy and Sir Patrick Stewart played a Frenchman in Star Trek: The Next Generation and Charles Xavier in X-men. How soon we forget.
To be fair: in some forums my posts were received positively. In others, I was immediately attacked by the diversity doppelganger of the aforementioned pound puppies: "woke folks." Specifically, I recall a diatribe about the movie and certain characters not being historically accurate. It was as interesting and I think the same phenomena as Arial NOT being a single white female. It was fascinating, but something I felt I had to address:
1. It’s a movie. The statement at the beginning says “based on true events.”
2. If your criticism is historical inaccuracy, that is correct. Often what is cinematic is not accurate. The writers have to generate conflict to keep our interests. That is the license of creativity.
3. I’m a Star Trek fan, but I also majored in Engineering Physics as an undergrad and pursuing graduate study in Nanoengineering. That said, I don’t watch Trek to learn physics as warp drive is inherently impossible at even a casual understanding of Einstein’s Special and General Theory of Relativity. It’s entertainment, nothing more.
I deeply enjoyed "Black Panther" and Chadwick Boseman's acting abilities, knowing full well his Wakandan accent was as practiced as Michael B. Jordan's and that Wakanda as a nation doesn't exist. Plus, Jack Kirby and Stan Lee who created the first black and distinctly African Superhero were two Jewish guys from New York!
I still wore my "straight out of Wakanda" shirt as others wore dashikis with pride and not a lot of analysis or forethought.
I am absolutely fine with Cynthia Erivo playing Harriet Tubman. I'm overjoyed David Gyasi is playing the real life inspiration for the whitewashed Lone Ranger. The African Diaspora in America are involuntarily from both of their home nations, knowing neither intimately. Both actors had to audition and be judged by the merits of their abilities. They worked as hard as the two Englishmen who portrayed a fictional billionaire superhero crime fighter and a starship captain in the 24th century. If neither of these individuals won their parts, we'd be talking about someone else.
No less than former President Obama called out the woke as non-activists, more concerned with scoring consciousness zingers than the heavy lifting of citizenship. He, and before him General Colin Powell and currently Kamala Harris via the ever ridiculous and receding Rush Limbaugh and through the "kings of woke" Ben Carson and Cornell West (Jonathan Capehart, Washington Post) wasn't "black enough" despite many times vilified and hung in effigy.
Both snow and woke are triggered beyond their tribal enclaves and feel the connected world closing in with divergent opinions of "how things used to/ought to be," a particular intolerance being the bedrock foundation of fascism.
Of the two groups, I can say voting in a (currently) democratic republic is a lot more important than posting opinions from their smart phones, or the basement.

Both need to switch to decaf.

I can't wait for their coming conniption fits on Bass Reeves.

The 'Superhero Journey' Of Harriet Tubman, Now On Film
Noel King, NPR Morning Addition
The Real Lone Ranger Was Black, And Now There Is A Movie About Him
Jerry L. Barrow, BET