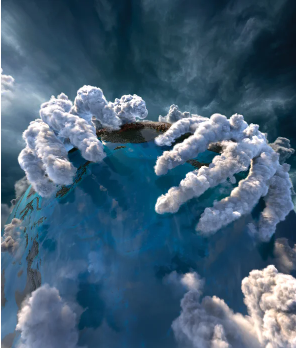 More moisture in a warmer atmosphere is fueling intense hurricanes and flooding rains.

The summer of 2021 was a glaring example of what disruptive weather will look like in a warming world. In mid-July, storms in western Germany and Belgium dropped up to eight inches of rain in two days. Floodwaters ripped buildings apart and propelled them through village streets. A week later a year’s worth of rain—more than two feet—fell in China’s Henan province in just three days. Hundreds of thousands of people fled rivers that had burst their banks. In the capital city of Zhengzhou, commuters posted videos showing passengers trapped inside flooding subway cars, straining their heads toward the ceiling to reach the last pocket of air above the quickly rising water. In mid-August a sharp kink in the jet stream brought torrential storms to Tennessee that dropped an incredible 17 inches of rain in just 24 hours; catastrophic flooding killed at least 20 people. None of these storm systems were hurricanes or tropical depressions.

Soon enough, though, Hurricane Ida swirled into the Gulf of Mexico, the ninth named tropical storm in the year’s busy North Atlantic season. On August 28 it was a Category 1 storm with sustained winds of 85 miles per hour. Less than 24 hours later Ida exploded to Category 4, whipped up at nearly twice the rate that the National Hurricane Center uses to define a rapidly intensifying storm. It hit the Louisiana coast with winds of 150 miles an hour, leaving more than a million people without power and more than 600,000 without water for days. Ida’s wrath continued into the Northeast, where it delivered a record-breaking 3.15 inches of rain in one hour in New York City. The storm killed at least 80 people and devastated a swath of communities in the eastern U.S.

What all these destructive events have in common is water vapor—lots of it. Water vapor—the gaseous form of H2O—is playing an outsized role in fueling destructive storms and accelerating climate change. As the oceans and atmosphere warm, additional water evaporates into the air. Warmer air, in turn, can hold more of that vapor before it condenses into cloud droplets that can create flooding rains. The amount of vapor in the atmosphere has increased about 4 percent globally just since the mid-1990s. That may not sound like much, but it is a big deal to the climate system. A juicier atmosphere provides extra energy and moisture for storms of all kinds, including summertime thunderstorms, nor’easters along the U.S. Eastern Seaboard, hurricanes, and even snowstorms. Additional vapor helps tropical storms like Ida intensify faster, too, leaving precious little time for safety officials to warn people in the crosshairs.