I am happy to announce that I have a new short story posted on my official writing blog. It's a tale of adventure on the high seas, set in the Red Sea between Africa and Arabia around 100 AD. The protagonist is a Kushite admiral hunting down Arabian pirates to avenge the loss of her brother, but little is she prepared for what really happened to him...

You can read the full story here. But allow me to give you a tasty sample of it below: 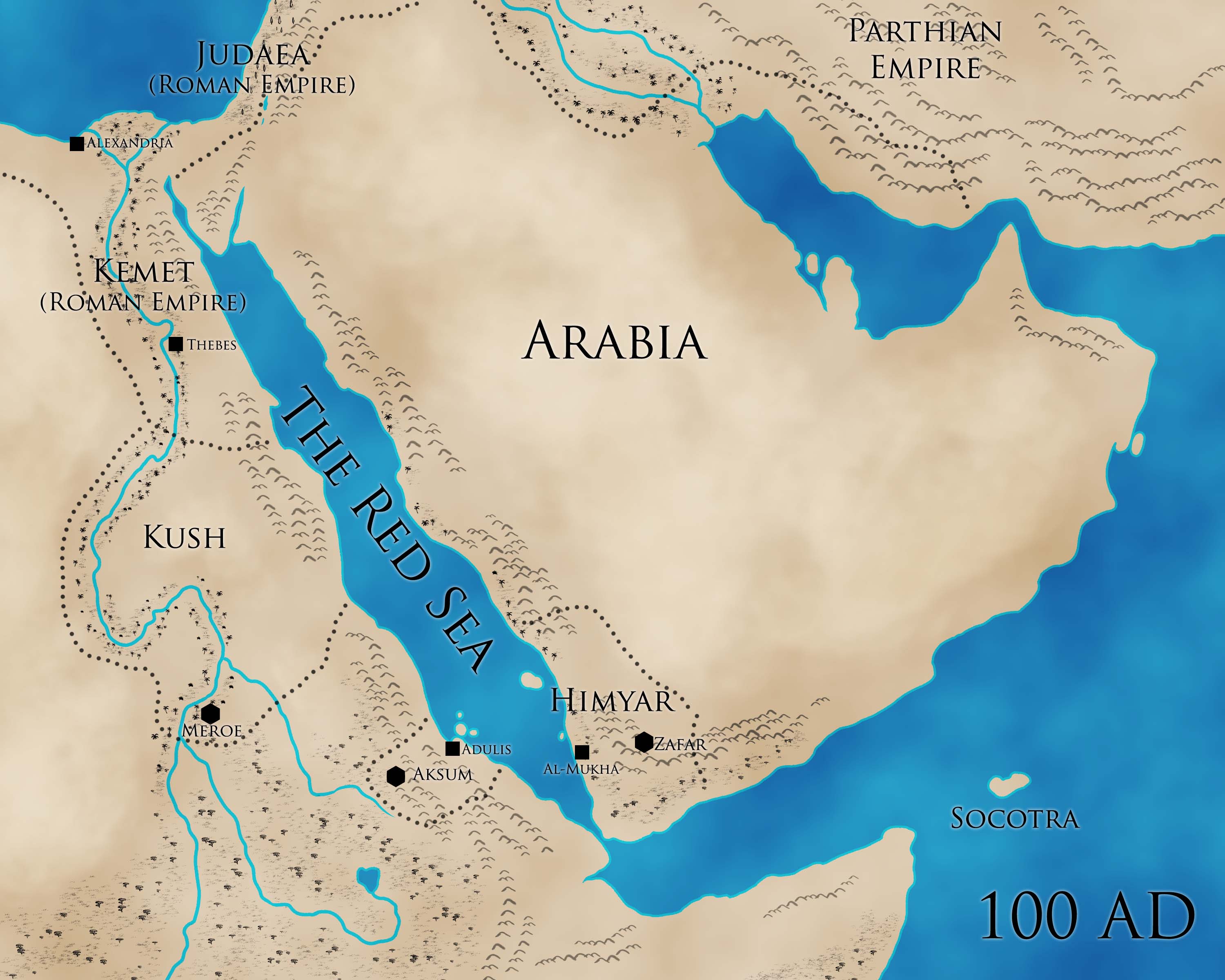 A commotion buzzed at the edge of the trading souq next to the harbor of al-Mukha on the southwestern coast of Arabia. All eyes of the spectators followed a slender galley of ebony fringed with gold and inlaid ivory as it slid and anchored beside one of the earthen quays. On its billowing crimson sail glowered the gold face of a ram supporting the sun on its horns, the royal insignia of Kush.

It was by no means unusual for a Kushite vessel to dock at al-Mukha. Plenty of merchants from all sides of the Red Sea and beyond would flock to the Himyarite port to sell their wares and restock for the next trip. Yet the black galley that had come in was a rare giant that would have dwarfed the typical merchantman, never mind the puny native dhows. Above the deck glimmered the iron-bladed spears, axes, and swords of the soldiers aboard.

Once they laid the gangplank down, there descended a svelte woman whose skin was dark as the galley itself, with her short ringlets of frizzy hair reddened with ocher. The black-spotted red sash around her bosom bound a bow and quiver to her back while a slim sword rested along her white linen skirt. From her neck hung a string of ivory fly-shaped medals that honored her as a fighting champion of Kush.

After the woman followed her entourage of spearmen with oval cowhide shields. As she and her bodyguards advanced up the quay, the audience that had watched their arrival parted to give them as broad a berth as they could, with nervous murmurs in Himyarite Arabic passing between the spectators.

Placing both hands on her hip, the woman cleared her throat with her head held up. “I am Nensela, Admiral of Kush. You need not fear anything, for we mean you no harm. We come to al-Mukha with only two purposes: to resupply and to find information.”

From the ranks of the crowd, a white-bearded local shot his bony hand up. “What do you mean by ‘information’, my lady?”

Nensela pulled out a scroll of papyrus from her belt and unfolded it, revealing a painted illustration of a blue scorpion with claws serrated like a lobster’s. “Have any of you ever heard of the Scorpions of the Sea?”

Most of the people dispersed back to the souq while the old man squinted at the scroll, his tawny face blanching a shade paler. “By Rahmanan, who in al-Mukha hasn’t? They come here every season. Are they wanted?”

Nensela marched to him with her hand clenched on her sword’s hilt. “I hope you are not feigning ignorance with me, old man. You ought to know they’ve been a menace for generations. Why, I lost my little brother to them! So, please, tell me everything you know!”

The old Himyarite scratched the back of his keffiyeh and shook his head. “The truth is, I recall not when they last dropped by. But Hussein the pot merchant may know. He’s done business with them more than once. I’d look for him in the northeast part of the souq, over there.”

He pointed his walking stick in the direction of the souq‘s far corner.

Nensela tossed him a bag of silver. “May Amun bless you for your aid, then.”

The souq of al-Mukha was a bustling maze of people thronging between rows of stalls that were shaded with awnings of sagging cloth. Most of the traders and their customers were native Himyarites and other Arabs, along with similar-looking peoples such as Judaeans, Phoenicians, and Mesopotamians. Yet speckled amid the bronze-faced majority were darker-skinned nationalities such as Kemetians, Aksumites, and even a few Kushites, the latter of whom saluted Nensela and her men as they passed. The fragrances of perfume, fresh fruit, and cooked meat mixed in the air with the less pleasant odors of fish, musty cloth, and camels being dragged about on rope leashes.

Over the chatter of the customers and the music of trilling flutes, twanging lyres, and banging drums, Nensela heard a man yell about having the finest collection of ceramics along the Red Sea. That must have been the pot merchant the old man at the docks had cited.

Taking advantage of her feminine wile, she smiled and swayed her hips as she sauntered towards his stall. “You wouldn’t happen to be a handsome gentleman by the name of Hussein, would you?”

A toothy grin spread across the man’s pudgy face as he nodded. “Well, aren’t you a welcome sight around here! Of course, it is I, Hussein bin Abdullah. Why, did someone recommend my wares to you?”

All over his stall and beside it stood stacks of almost every ceramic form that could be found all over the known world. Wide-topped Kemetian jars inscribed with hieroglyphic texts sat beside orange-and-black Greek vases, Chinese porcelain, and native Arabian oil lamps with elongated nozzles. Nensela noticed there were also some Kushite bowls on display, distinguished from the rest by their black tops grading to red towards the bottom. She could not help but pick one of them up, for it had reminded her of the bowls her mother would make for her and her brother Akhraten to eat from when they were children.

Those were simpler, happier times. But they had fallen into the past. With them had gone Akhraten, all courtesy of the vile Sea Scorpions.

“My mother made pots like this,” Nensela said. “Where do you get these, my dear Hussein?”

“Oh, is that so? Because I’ve been informed that you have connections with those known as the Sea Scorpions…”

Nensela slammed her hands onto the stall, shaking the stacks of pottery until some of it fell and shattered on the ground. “Tell me the truth, Hussein bin Abdullah. When did you last deal with them?”

“I can’t say, but it isn’t them! I swear by Rahmanan, I would never profit from piracy!”

Nensela grabbed him by the collar of his tunic and hauled him off his feet. “Do not lie to me anymore! Tell me, for the safety of all around the Red Sea, whom you get your goods from. Do you hear me? Talk!”

Hands clapped as loud as the crack of thunder, and then the whole souq fell silent.

The one who had clapped was a stout Himyarite man, robed in black, with a white keffiyeh draped over the sides of his head. Everyone else in the souq stepped back to make way for him as he hurried towards Nensela and Hussein with a gentle smile under his gray-streaked mustache.

“There is no need for violence, my child,” he said. “Please put him down.”

Nensela obeyed with a grumble. “Please, do not call me ‘child’, for I am the Admiral of Kush. And I’ve good reason to believe this Hussein character is collaborating with pirates!”

“It is a lie, I assure you!” Hussein yelped.

“I will assess the truth of the matter later, Hussein bin Abdullah,” the black-robed man said. “Pardon me for my condescension there, O Admiral of Kush, but I am the Sheikh of al-Mukha. These are all my people, so I must implore you that you treat them with care while you are here.”

“You are the Sheikh?” Nensela bowed at the waist before him. “Then I must apologize for my behavior. I must admit I have little love for pirates, or those I am told are involved with their crimes.”

From the corner of her eye, she cast a glare at Hussein while he was picking up pieces of broken pottery. He repaid with a rude look of his own.

“You speak of pirates, Admiral? It so happens that I have information of my own on them,” the Sheikh of al-Mukha said. “And unlike that gentleman over there, I’ll be more than willing to share it…within the privacy of my own home, mind you. Why don’t you and your men come over for some refreshment after your long voyage?”