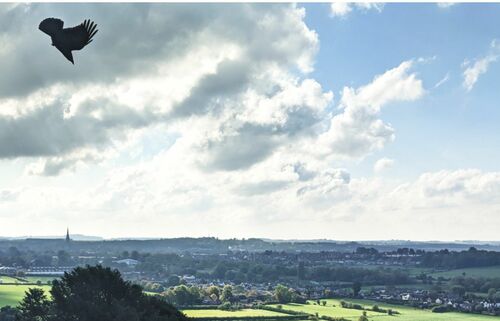 Observations of clouds, sunbeams, and birds—like those seen in this photo taken in Salisbury, UK—were important elements of classical weather forecasting. (Image courtesy of Peter Lawrence.)

In August 1861 the London-based newspaper The Times published the world’s first “daily weather forecast.” The term itself was created by the enterprising meteorologist Robert FitzRoy, who wanted to distance his work from astrological “prognostications.” That story has led to a widespread assumption that weather forecasting is an entirely modern phenomenon and that in earlier periods only quackery or folklore-based weather signs were available.

However, more recent research has demonstrated that astronomers and astrologers in the medieval Islamic world drew widely on Greek, Indian, Persian, and Roman knowledge to create a new science termed astrometeorology. Central to the new science was the universal belief that the planets and their movements around Earth affected atmospheric conditions and weather. It was enthusiastically received in Christian Latin Europe and was further developed by Tycho Brahe, Johannes Kepler, and other astronomers. The drive to produce reliable weather forecasts led scientists to believe that astrometeorological forecasting could be more accurate if they used precise observations and records of weather to refine predictions for specific localities. Such records were kept across Europe beginning in the 13th century and were correlated with astronomical data, which paved the way for the data-driven forecasts produced by FitzRoy.1

Islamicate astrometeorologists were the first to replace the ancient practice of observing only short-term signs, such as clouds and the flight of birds, to predict the weather. They based their action on the hypothesis that weather is caused by the movements of planets and mediated by regional and seasonal climate conditions. Improved calculations of planetary orbits and updated geographical and meteorological information made the new science possible and compelling.

The prospect of acquiring reliable weather forecasts, closely linked to predictions of coming trends in human health and agricultural production, made the new meteorology attractive in Christian Europe too. Considerable pride shines through medieval Christian accounts of the weather questions that they could now start to answer. Central among them was one that classical meteorologists had failed to figure out: How can weather vary so much from one year to the next when the seasons are caused by regular, repeating patterns produced by Earth’s spherical shape and its interactions with the Sun?

Medieval weather prediction, Anne Lawrence-Mathers is a professor of history at the University of Reading in the UK. Physics Today