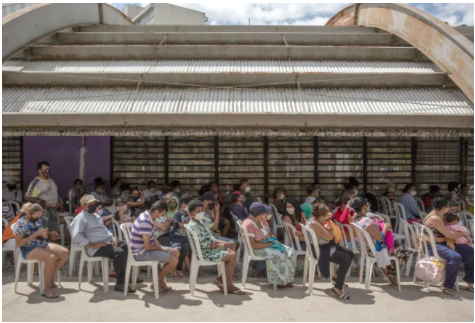 Residents of the Pairaisopolis favela in Sao Paolo wait for meal distribution in the economic crisis brought on by the pandemic. Credit: Alexandre Schneider Getty Images

Note: Many stories are coming out of Seychelles. It is the most vaccinated nation on earth that is seeing rising cases of the Coronavirus due to tourism by Indian elites. We're not going to solve this piecemeal, nor treating each other in our backward, moribund tribal "traditions." This fight is a long haul, and hubris can make it longer, and more painful.

To be in Brazil right now feels like being trapped in the middle of a chaotic battlefield, a 14-month-long siege, without anyone in charge on your side of the trenches. Totally surrounded by a lethal enemy that keeps getting closer to you and your family. This biological foe keeps morphing in a way that seems well adapted to infect everyone within reach, showing mercy neither for pregnant women nor for their newborn babies.

After 12 months of such brutal biological warfare, more than 390,000 Brazilians have perished; the number of fatalities climbed to more than 4,000 fatalities a day in early April, and the number of new cases per day edged above 100,000, filling hospitals to capacity with tens of thousands of terminally ill patients who occupy all available ICU beds in a country that has one of the largest national public health systems in the world and more hospitals than the U.S. Such a steady tsunami of severely sick patients has led to an unprecedented collapse of the entire country’s health system and the setting of yet another pair of world records in terms of both infected and deceased health professionals. On top of that, the country’s stock of medical equipment and the supplies required to intubate patients in need of respirators to survive are running at a historic low and may run out completely because the federal government simply failed in the process of replenishing the national stockpile several months ago.

This, in a nutshell, is the catastrophic and unprecedented hecatomb that Brazil found itself locked in by mid-April 2021. A devastating second wave of the pandemic began to engulf all five regions of the country back in early November 2020. It resulted, in part, from the premature and chaotic relaxation of social isolation measures that had helped at least some regions of the country contain the worst of the initial phase of the pandemic. It worsened because of the large public political rallies that preceded the two rounds of the 2020 national elections, generating a multitude of super spreader events all over the country. And the situation was exacerbated by Christmas and Carnival, the largest national festivity.

Brazil’s Pandemic Is a ‘Biological Fukushima’ That Threatens the Entire Planet, By Miguel Nicolelis, Scientific American