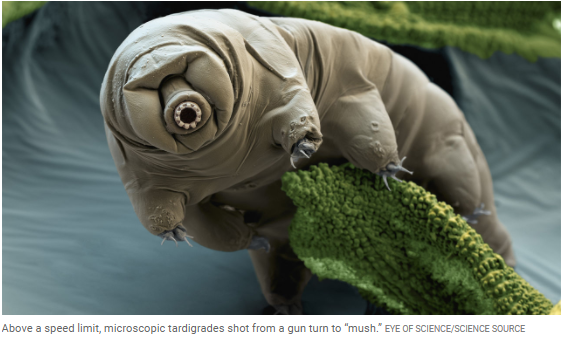 They can survive temperatures close to absolute zero. They can withstand heat beyond the boiling point of water. They can shrug off the vacuum of space and doses of radiation that would be lethal to humans. Now, researchers have subjected tardigrades, microscopic creatures affectionately known as water bears, to impacts as fast as a flying bullet. And the animals survive them, too—but only up to a point. The test places new limits on their ability to survive impacts in space—and potentially seed life on other planets.

The research was inspired by a 2019 Israeli mission called Beresheet, which attempted to land on the Moon. The probe infamously included tardigrades on board that mission managers had not disclosed to the public, and the lander crashed with its passengers in tow, raising concerns about contamination. “I was very curious,” says Alejandra Traspas, a Ph.D. student at Queen Mary University of London who led the study. “I wanted to know if they were alive.”

Traspas and her supervisor, Mark Burchell, a planetary scientist at the University of Kent, wanted to find out whether tardigrades could survive such an impact—and they wanted to conduct their experiment ethically. So after feeding about 20 tardigrades moss and mineral water, they put them into hibernation, a so-called “tun” state in which their metabolism decreases to 0.1% of their normal activity, by freezing them for 48 hours.</em>

They then placed two to four at a time in a hollow nylon bullet and fired them at increasing speeds using a two-stage light gas gun, a tool in physics experiments that can achieve muzzle velocities far higher than any conventional gun. When shooting the bullets into a sand target several meters away, the researchers found the creatures could survive impacts up to about 900 meters per second (or about 3000 kilometers per hour), and momentary shock pressures up to a limit of 1.14 gigapascals (GPa), they report this month in Astrobiology. “Above [those speeds], they just mush,” Traspas says.</em>