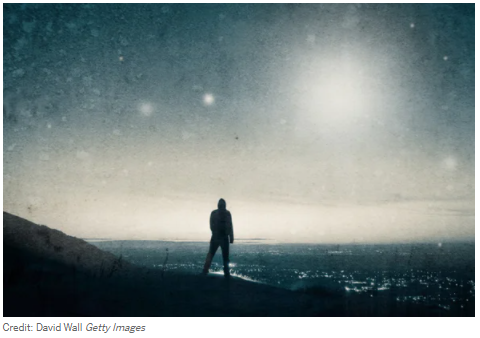 I would extend his theme to cover something that comes naturally to us all, which I’ll call Pseudo-exceptionalism—the unearned conviction that we are exceptional, superior to others because we were born...us.

We simply assume that we’re kinder, more honest, more realistic, more wholesome than those around us. After all, we’re married to ourselves for life, so we make accommodations: We cut ourselves slack. We’re fast to forgive ourselves. When challenged, we’re much better at making our case than our opponent’s. We spot injustices to ourselves far faster than we spot our injustices to others.</em>

Why Some People (Maybe Even Us) Think They're So Special
… and what to do about it. Jeremy E. Sherman Ph.D., MPP, Psychology Today

It is presumptuous to assume that we are worthy of special attention from advanced species in the Milky Way. We may be a phenomenon as uninteresting to them as ants are to us; after all, when we’re walking down the sidewalk we rarely if ever examine every ant along our path.

Our sun formed at the tail end of the star formation history of the universe. Most stars are billions of years older than ours. So much older, in fact, that many sunlike stars have already consumed their nuclear fuel and cooled off to a compact Earth-size remnant known as a white dwarf. We also learned recently that of order half of all sunlike stars host an Earth-size planet in their habitable zone, allowing for liquid water and for the chemistry of life.

Since the dice of life were rolled in billions of other locations within the Milky Way under similar conditions to those on Earth, life as we know it is likely common. If that is indeed the case, some intelligent species may well be billions of years ahead of us in their technological development. When weighing the risks involved in interactions with less-developed cultures such as ours, these advanced civilizations may choose to refrain from contact. The silence implied by Fermi's paradox (“Where is everybody?”) may mean that we are not the most attention-worthy cookies in the jar.

Why Do We Assume Extraterrestrials Might Want to Visit Us? Avi Loeb, Scientific American