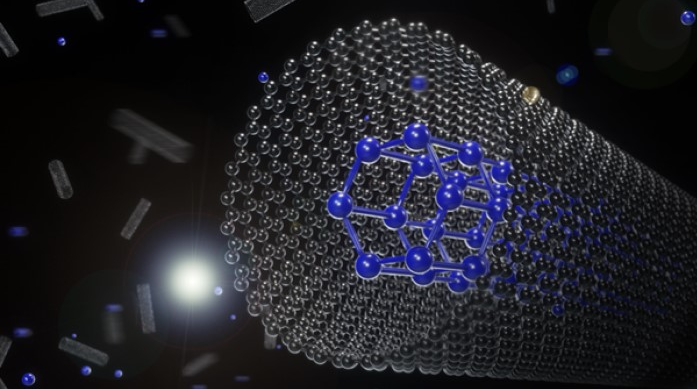 From TNT to nitro-glycerine, nitrogen-rich compounds are known for packing an explosive punch. When these materials explode, bonds between atoms in the compounds are broken, which gives a chance for two nitrogen atoms to form very strong triple bonds with each other. This releases an enormous amount of chemical energy due to the high strength of the triple bond, which is almost six times stronger than its single-band counterpart. In fact, the strength of nitrogen-nitrogen triple bonds is one of the reasons that the stable nitrogen gas dominates Earth’s atmosphere.

This chemical property of nitrogen is encouraging scientists to develop new nitrogen-rich compounds for use as high-energy-density materials that can be used as explosives or propellants. Polymeric nitrogen exists in the form of chains and tubes of linked nitrogen atoms with a high number of single or double bonds that can break and form triple bonds, releasing a large amount of energy and no dangerous by-products.

Several types of these polymers have been made at high temperatures and pressures, but they have been notoriously difficult to stabilize under ambient conditions. However, the electrochemical pressure inside the confined walls of carbon nanotubes may be the key to realizing these structures under more practical conditions. In a paper, published in Chinese Physics Letters, a team of scientists led by Jian Sun at Nanjing University provides a theoretical map of the process and the resulting compounds.