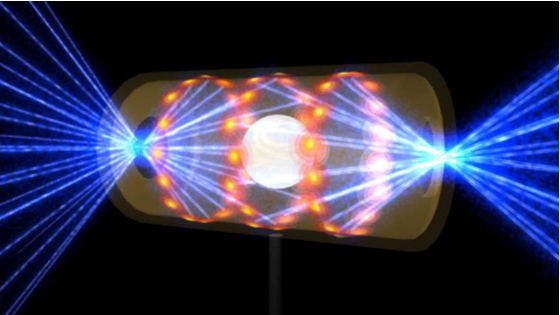 An artist’s rendering shows how the National Ignition Facility’s 192 beams enter an eraser-size cylinder of gold and heat it from the inside to produce x-rays, which then implode the fuel capsule at its center to create fusion.

More than a decade ago, the world’s most energetic laser started to unleash its blasts on tiny capsules of hydrogen isotopes, with managers promising it would soon demonstrate a route to limitless fusion energy. Now, the National Ignition Facility (NIF) has taken a major leap toward that goal. Last week, a single laser shot sparked a fusion explosion from a peppercorn-size fuel capsule that produced eight times more energy than the facility had ever achieved: 1.35 megajoules (MJ)—roughly the kinetic energy of a car traveling at 160 kilometers per hour. That was also 70% of the energy of the laser pulse that triggered it, making it tantalizingly close to “ignition”: a fusion shot producing an excess of energy.

“After many years at 3% of ignition, this is super exciting,” says Mark Herrmann, head of the fusion program at Lawrence Livermore National Laboratory, which operates NIF.

NIF’s latest shot “proves that a small amount of energy, imploding a small amount of mass, can get fusion. It’s a wonderful result for the field,” says physicist Michael Campbell, director of the Laboratory for Laser Energetics (LLE) at the University of Rochester.

“It’s a remarkable achievement,” adds plasma physicist Steven Rose, co-director of the Centre for Inertial Fusion Studies at Imperial College London. “It’s made me feel very cheerful. … It feels like a breakthrough.”

And it is none too soon, as years of slow progress have raised questions about whether laser-powered fusion has a practical future. Now, according to LLE Chief Scientist Riccardo Betti, researchers need to ask: “What is the maximum fusion yield you can get out of NIF? That’s the real question.”

Fusion, which powers stars, forces small atomic nuclei to meld together into larger ones, releasing large amounts of energy. Extremely hard to achieve on Earth because of the heat and pressure required to join nuclei, fusion continues to attract scientific and commercial interest because it promises copious energy, with little environmental impact.