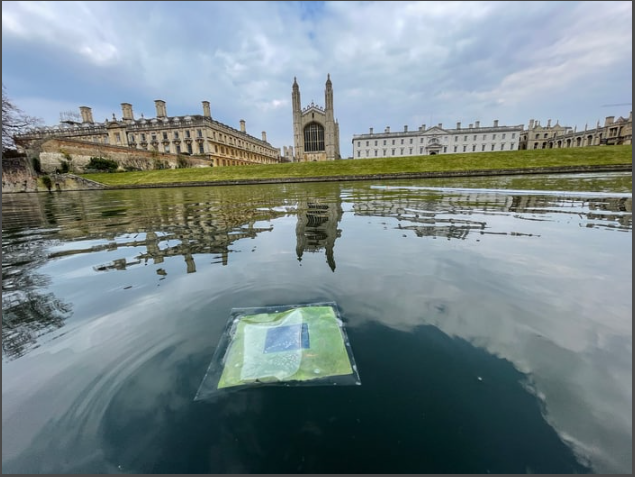 A floating artificial leaf – which generates clean fuel from sunlight and water – on the River Cam near King's College Chapel in Cambridge, UK. (Courtesy: Virgil Andrei)

Leaf-like devices that are light enough to float on water could be used to generate fuel from solar farms located on open water sources. This avenue hasn’t been explored before, according to researchers from the University of Cambridge in the UK who developed them. The new devices are made from thin, flexible substrates and perovskite-based light-absorbing layers. Tests showed that they can produce either hydrogen or syngas (a mixture of hydrogen and carbon monoxide) while floating on the River Cam.

Artificial leaves like these are a type of photoelectrochemical cell (PEC) that transforms sunlight into electrical energy or fuel by mimicking some aspects of photosynthesis, such as splitting water into its constituent oxygen and hydrogen. This differs from conventional photovoltaic cells, which convert light directly into electricity.

Because PEC artificial leaves contain both light harvesting and catalysis components in one compact device, they could, in principle, be used to produce fuel from sunlight cheaply and simply. The problem is that current techniques for making them can’t be scaled up. What is more, they are often composed of fragile and heavy bulk materials, which limits their use.

In 2019 a team of researchers led by Erwin Reisner developed an artificial leaf that produced syngas from sunlight, carbon dioxide, and water. This device contained two light absorbers and catalysts, but it also incorporated a thick glass substrate and coatings to protect against moisture, which made it cumbersome.