From the travelogue of Josephus Sumner 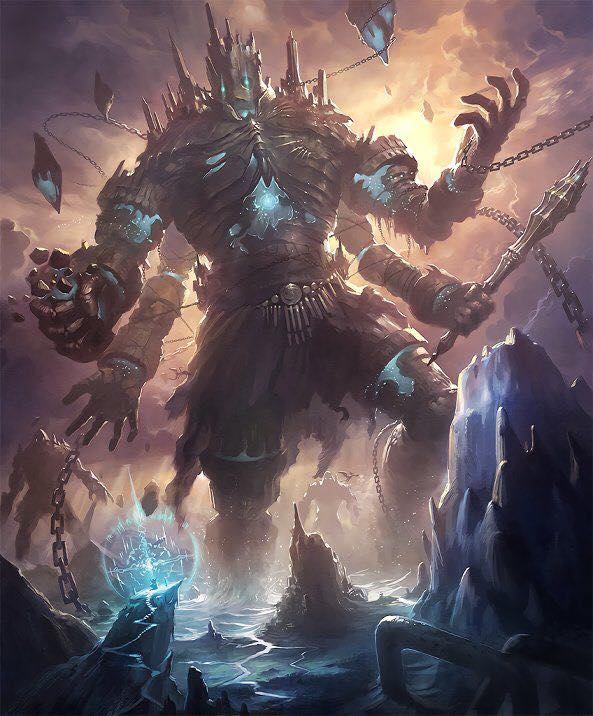 High Fantasy By Thaddeus Howze
On the edge of Mahatmalaya, the greatest realm, the cynosure of the shadow worlds, the nexus of all there is, was, and ever will be, stand the Leviathans of Brass.
When Mahatmalaya was young there were many such realms like it. Each spinning off its own shadows, its hidden realities from which life developed at their own pace, with creatures whose capacities varied widely. Those who developed quickly and mastered fundamental forces learned they could move between shadow realms, laying claim to new territories, mastering new creatures and magics. But sometimes they vanished without a trace. Their armies, machines, beasts, warriors, swallowed whole.
Such realms were marked and given wide berth. In that fashion of great systems, each stabilized in its own way and as they did, some entire realms fell to the control of alliances, confederacies, coalitions or federations which plumbed the depths of their core reality until they discovered the unthinkable.
They were not alone in the Multiverse. Some went mad discovering there were realities beyond their own. Having mastered shadow travel, they thought nothing was beyond their reach. Laying claim to millions of realms, mastering thousands of species, using every kind of technology imaginable, they were still unable to breach the walls between Multiverses.
For many, this destroyed their core reality, the notion they were not at the center of all there is left them unable to understand how the Universe could be so cruel to them, to create them, allow them mastery of their Universe and then leave something beyond their reach.
For others, for those cool intellects, driven to know, hungering for their next conquest, they persevered. A million years pass. Two million. Their intensity was gifted with success. They breached the wall between Multiverses.
They poured their armies through the splinters of Reality, great powers attempting to reshape the very stuff of this new place they found themselves in.
They blackened the skies with their machines, in numbers beyond counting they entered Mahatmalaya. To discover the Leviathans in waiting. Bound to this singular location, a place where the wall between Universes was weakest, the Leviathans were placed in expectation of visitors.
For you see, Mahatma was the greatest scientist/mystic of his era. He had pierced the wall between Multiverses millennia ago. His spiritual travels revealed the dangers, the fear, the greed beyond his own dimension and armed with this knowledge created these doomsday machines for just this purpose.
To deter visitors. To prevent unwanted invasion. To maintain the peace of Mahatma's realm. His Leviathans were his greatest and last creation.
Standing ten thousand meters high, powered by demonic magics, bound djinn, elementals whose energies were akin to stars drove these living machines, who wandered this region of the realm, engaged in intellectual debate, sending pieces of themselves across the Universe ever in exploration and study.
Waiting for the day such a visitation feared by their Maker would arrive. Formed of Brass from the Realm of Dis, hard as adamant, capable of holding in and protecting the powerful spirits contained within, each Leviathan held a space within it, an entire world-engine, a bound star whose powers would never die.
That day has come. The Leviathans continue their communing with one another as they destroy the nigh limitless invaders, lighting the skies with lightning chains whose thunder was heard in other nearby shadow realms, altering reality, transforming their ships into hunks of lead, which plummet lifelessly to the ground.
Their assault was the greatest thing the Leviathans had ever experienced. It was what they were designed for. They never knew it would be so glorious.
And so brief. A thousand years later, the Invaders ceased. Their great armies depleted, their war machine drained of vitality, entire worlds wrung dry of life, and the Leviathans stood unmarred, unbroken. Still engaged in philosophical debate as they deconstructed the alien ships, absorbed their crews into themselves, marveling at the psychoses of their new components, re-arming themselves in expectation of new visitation.
With their purpose revealed, with their explorations of Mahatma continuing, they realized the value of what they protected. They deemed it precious.
Worthy of being protected. There was debate, every century or so, as to consider the one thing Mahatma forbid. Whether they should resolve the threat of enemy visitation by traveling to other Multiverses, first.
They ponder it for a century or two, and decide if Mahatma had wanted this, he would have done it himself. It was not their place to go against his final wishes.
Resolved, for a time, the Leviathans conversed with a new visitor, someone from Mahatma whose aura was much like the Maker's. They hoped for something unexpected to discuss in the lull between visitors.
-- An excerpt from the Travelogue of Josephus Sumner, after a conversation with the Leviathans of Brass.
Tags: #imageprompt #leviathans #josephussumner #mahatmal
E-mail me when people leave their comments –
Follow