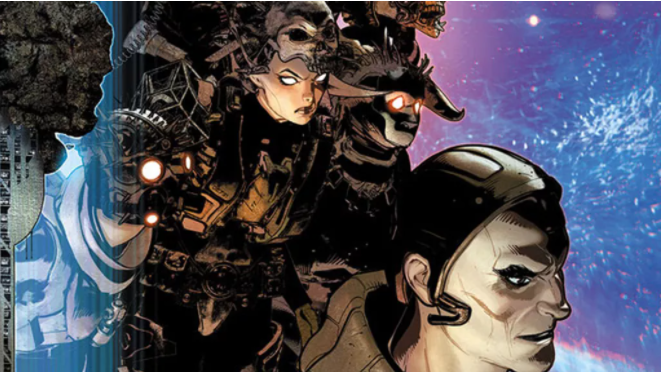 Widely considered to be the "Father of Science Fiction," the famed French poet, novelist, and playwright [known] as Jules Verne celebrates what would have been his 193rd birthday this year.

Now one of Verne’s lesser-known works from 1905, "The Lighthouse At The End Of The World," is being adapted for the first time into a five-issue comic book miniseries at Image Comics premiering in April. Orchestrated by the veteran creative team of Brian Haberlin and David Hine ("The Marked,'" "Sonata"), "Jules Verne's: Lighthouse" gets a sci-fi twist and casts readers into the high seas of outer space for a swashbuckling cyberpunk saga.

"Jules Verne's: Lighthouse" is set at the edge of the galaxy, where there is a giant supercomputer known as the Lighthouse. The only brain powerful enough to navigate ships through a Sargasso of naturally occurring wormholes, potentially cutting months or even years of a spaceship's journey. Three humans, one alien, and a nanny bot have manned the remote station for years in relative peace until the arrival of Captain Kongre and his band of cutthroat pirates threatens the future of civilization and reveals that each of the Lighthouse crew has been hiding a shocking secret. He who controls the Lighthouse controls this part of the galaxy."