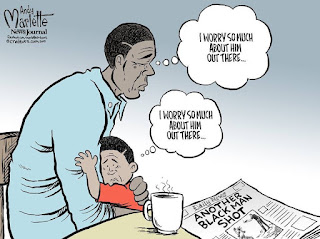 
Originally published February 27, 2017, during Black History Month. We are reeling from George Floyd, Breonna Taylor and Ahmaund Aubrey. "I can't breathe" isn't a cliche: it's a statement of continual trauma, perpetual PTSD from 1619 to present day. We can't breathe from the 82 black boys and men killed before, and now during a global pandemic. We can't breathe from armed gunman shouting at police and threatening lawmakers in Michigan, and unarmed, pissed off demonstrators getting maced, rubber bullets and flash bombed after a murder in the same state Philando Castile lost his life in for a concealed handgun licence. It is building a nation, but not taking part of its advantages fully. It is a relationship to a maniacal, misogynistic, patriarchal, racist, sociopathic system that is determined we nonwhite  "stay in our places" - pariah to the rest of the nation founded on genocide, kidnapping and domestic terrorism - in abject fear, all the while masking quite poorly their own stated, pseudoscientific conspiratorial fears of genetic annihilation. Since we all share the same planet, and I see no starships in orbital shipyards under construction, the only thing their inane fears may bring to apocalyptic destruction is the human species.
*****Re-post with additions*****
The talk is painful to do and painful still to recall. My talk was based on being slammed into a wall of plastic model cars and toys at King's Department Store (see: "Old Tapes" below).
My boys... didn't take the story well. Though ten years apart, their reactions were the same: they were angry, hurt, confused as to why such a thing could happen to their "Pop." Watching this again, in the modern context brought back painful memories:
Despite there and my tears, I had to deliver "the talk," the speech that transcends political party affiliations that every black parent has to relay to their children: fathers to sons; mothers to daughters; uncles and aunts to nieces and nephews; "Big Mommas," and Paw-Paws to grand and great-grandchildren. Despite their tears, my oldest son and his wife will have to deliver "the talk" to our granddaughter, now accustomed to a world in which daycare workers must wear masks; a world where she will likely be judged by the color of her skin, her gender and not the content of her character.
The Preamble to the US Constitution:
We the people of the United States, in order to form a more perfect union, establish justice, insure domestic tranquility, provide for the common defense, promote the general welfare, and secure the blessings of liberty to ourselves and our posterity, do ordain and establish this Constitution for the United States of America.
Posterity (noun): 1: the offspring of one progenitor to the furthest generation, 2: all future generations. Merriam-Webster
That's what "the talk" is about. It's probably the purist act of citizenship since 1865, as well as love. It says our children matter to "us"; that like most parents of any generation, we'd like to see them grow, mature and have a life of meaning and children themselves if they want. It does not sound like the realm, attitude or philosophy of thugs: it sounds like the realm of citizens. If indeed "all lives mattered," it would not be necessary.
This is the darker history of American exceptionalism. A segment of citizenry - be they democrats or republicans - must give a safety brief to their children for walking out the door into the dominant society to ensure their safe return. Because apparently, that's not guaranteed due to a preponderance of Melanin and an equal preponderance of the assumption guilty-while-black.
When the talk becomes a thing we discuss in history books, we'll be a free nation; we'll be America, the Beautiful, definitively.
I will consider my life a blessing to have my sons live full lives, and be allowed to do what I had to do with their Grandpa, Robert Harrison Goodwin after August 26, 1999, and their Grandma Mildred Dean Goodwin after May 7, 2009: 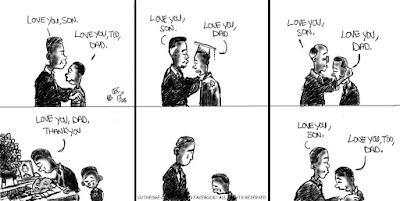 To Robert Harrison Goodwin (Pop/Grandpa), Third Class Petty Officer, United States Navy Veteran, World War II -my first martial arts instructor (boxing). I hope you like what your daughter-in-law and I have done with your grandsons (Real Estate/Civil Engineering), and now, your great-granddaughter. They are, after all, your posterity. We love you and mom always, "Chief."