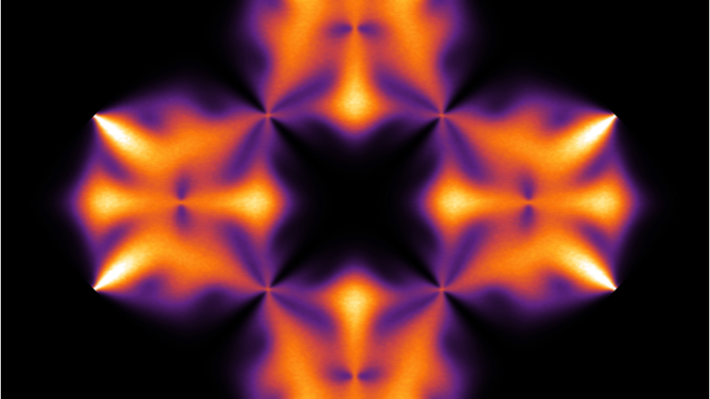 This simulation shows how a fracton-filled material would be expected to scatter a beam of neutrons.
H. Yan et al., Physical Review Letters

Your desk is made up of individual, distinct atoms, but from far away its surface appears smooth. This simple idea is at the core of all our models of the physical world. We can describe what’s happening overall without getting bogged down in the complicated interactions between every atom and electron.

So when a new theoretical state of matter was discovered whose microscopic features stubbornly persist at all scales, many physicists refused to believe in its existence.

“When I first heard about fractons, I said there’s no way this could be true because it completely defies my prejudice of how systems behave,” said Nathan Seiberg, a theoretical physicist at the Institute for Advanced Study in Princeton, New Jersey. “But I was wrong. I realized I had been living in denial.”

The theoretical possibility of fractons surprised physicists in 2011. Recently, these strange states of matter have been leading physicists toward new theoretical frameworks that could help them tackle some of the grittiest problems in fundamental physics.

Fractons are quasiparticles — particle-like entities that emerge out of complicated interactions between many elementary particles inside a material. But fractons are bizarre even compared to other exotic quasiparticles because they are totally immobile or able to move only in a limited way. There’s nothing in their environment that stops fractons from moving; rather it’s an inherent property of theirs. It means fractons’ microscopic structure influences their behavior over long distances.

“That’s totally shocking. For me it is the weirdest phase of matter,” said Xie Chen, a condensed matter theorist at the California Institute of Technology.