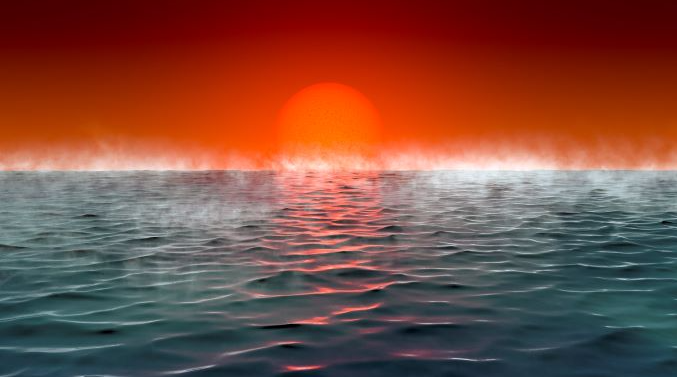 Hot and humid The surface of a Hycean planet as interpreted by an artist. (Courtesy: Amanda Smith, University of Cambridge).

Hot, ocean-covered exoplanets with hydrogen-rich atmospheres could harbor life and may be more common than planets that are Earth-like in size, temperature, and atmospheric composition. According to astronomers at the University of Cambridge, UK, this newly defined class of exoplanets could boost the search for life elsewhere in the universe by broadening the search criteria and redefining which biosignatures are important.

Astronomers define the habitable or “Goldilocks” zone as the region where an exoplanet is neither too close nor too far from its host star to have liquid water on its surface – water being the perfect solvent for many forms of life. Previous studies of planetary habitability have focused primarily on searching for Earth-like exoplanets and evidence that they could harbor the kind of chemistry found in life on Earth. However, it has so far proven difficult to detect atmospheric signatures from Earth-like planets orbiting Sun-like stars.

Larger exoplanets are easier to detect than smaller, Earth-sized ones, and exoplanets around 1.6‒4 times bigger than the Earth, with masses of up to 15 Earth masses and temperatures that in some cases exceed 2000 K, are relatively common. These planets are known as mini-Neptune's as they are similar to the ice giant planets in our solar system.

Previous studies suggested that the high pressures and temperatures beneath these planets’ hydrogen-rich atmospheres were incompatible with life. However, based on their analysis of an exoplanet called K2-18b, exoplanet scientist Nikku Madhusudhan and colleagues at Cambridge say that life could, in fact, exist on a subset of mini-Neptunes that meet specific criteria.

This subset, which the researchers dub “Hycean” (hydrogen + ocean) planets, consists of planets that have radii up to 2.6 times larger than Earth’s and are capable of harboring vast oceans under atmospheres dominated by molecular hydrogen and water vapor. Such oceans could cover the whole planet and reach depths greater than the Earth’s oceans, and the researchers say that the conditions within them could be compatible with some forms of Earth-based microbial life. Hycean planets tidally locked with their host star could also exhibit habitable conditions on their permanent night side.