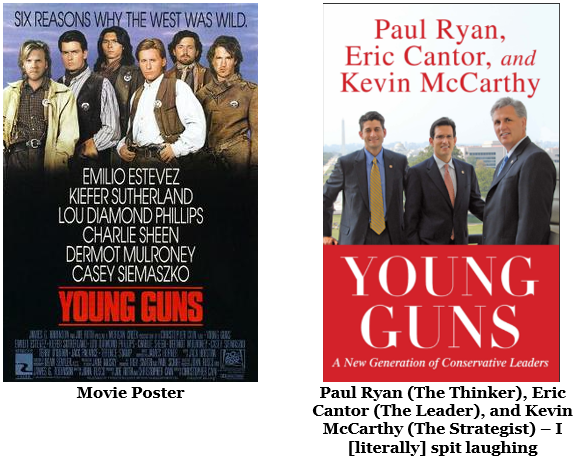 One of Murphy's hired hands, McCloskey, joins Tunstall while Doc attempts to court Murphy's ward, Yen Sun. Murphy's men kill Tunstall, leading his lawyer friend Alexander McSween to arrange for the Regulators to be deputized and given warrants for the killers' arrest. Hotheaded Billy challenges Dick's authority as the group's foreman as the Regulators attempt to take Murphy's henchmen alive. Instead, Billy guns down several unarmed men, including McCloskey, whom he suspects of still working for Murphy. Newspapers paint the Regulators as a deadly gang headed by a larger-than-life outlaw, "Billy the Kid."

Make no mistake: Congressmen Eric Cantor, Paul Ryan, and Kevin McCarthy are proud Republicans. But they believe the party had lost sight of the ideals it believes in, like economic freedom, limited government, the sanctity of life, and putting families first. This isn’t your grandfather’s Republican party. These Young Guns of the House GOP—Cantor (the leader), Ryan (the thinker), and McCarthy (the strategist)—are ready to take their belief in the principles that have made America great and translate it into solutions that will make the future even better, solutions that will create private sector jobs, maximize individual freedom, and establish a better world for our children. This groundbreaking book is a call to action that sets forth a plan for growth, opportunity, and commitment to propel this country to prosperity. Together, the Young Guns are changing the face of the Republican party and giving us a new road map back to the American dream.

A New Generation of Conservative Leaders

A Faustian bargain is a pact whereby a person trades something of supreme moral or spiritual importance, such as personal values or the soul, for some worldly or material benefit, such as knowledge, power, or riches. Britannica online

When Kev sought the Speakership previously, he eighty-sixed himself by his gaffe on Benghazi and Hillary Clinton (saying the quiet part out loud) and an alleged affair (when Republicans CARED about things like that). My favorite Kev-ism is the one that came and went like a silent, deadly fart: "I think Putin pays Trump" a month before Orange Satan clinched the nomination, and we've been in the Twilight Zone ever since.

Kevin McCarthy said that the "President bore responsibility for the Capital Riot on January 6," then voted with the insurrectionists who wanted to overthrow a free and fair election. He followed that up with a whirlwind tour of Butt-kissing down at the gaudy resort of the twice-impeached leader of the Republican Party in Florida. He could have invoked the 25th Amendment. He could have whipped the votes in the House from Republican members to support impeachment BOTH times! He raised money for the "Taliban 20" that voted against his Speakership, and Marjorie Taylor, "Secret Jewish Space Lasers," found out the hard way to get what he wants - power - he would lie to even the QUEEN of MAGA. To enter into a Faustian bargain, one assumes "The Kev" had a soul to haggle with the Orange Devil from Mar-a-Lard-o in trade. Jellyfish have more spine.

“Created realities” and the vote for Speaker.

This is the first time in a century that there’s been a failed vote for Speaker. “Kev” is like the Republican Party: no agenda, no platform, and no ideology to govern. All this after copious Butt-kissing on the altar of the graven image of Orange Cheeto. The party has a problem with facts and reality. Kev is the last man standing for the “Young Guns." The Tea Party drove out the former. Kev-o is being driven crazy in prime time.

The aide said that guys like me [Suskind] were "in what we call the reality-based community," which he defined as people who "believe that solutions emerge from your judicious study of discernible reality." I nodded and murmured something about enlightenment principles and empiricism. He cut me off. "That's not how the world works anymore," he continued. "We're an empire now, and we create our own reality when we act. And while you're studying that reality — judiciously, as you will — we'll act again, creating other new realities, which you can study too, and that's how things will sort out. We're history's actors ... and all of you will be left to study what we do." [The New York Times Magazine] Attributed to Karl Rove, which he denies.

The GOP Leader in the House cursed at his chaotic, fractious, raucous caucus, and Gunboat Barbie, Lauren Boebert, cursed him back.

Hakeem Jeffries got 212 votes (in one round), Kev 202, and Jim Jordan 20 after THREE. He failed to get elected Speaker SIX TIMES on Wednesday (by Thursday, as I type this, that count went to ten), and by the House Clerk not gaveling when time expired, it allowed them to sneak a few more votes in to get the ONE successful vote out of seven: to adjourn, and avoid at the time a seventh defeat. Nathanial Banks of Massachusetts holds the longest, most contentious record at 133 - right before the poorly-named Civil War, and I think Kev-a-Tron is going for the Guinness Book of World Records. We now have Kev-bro, or likely Steve Scalese, self-described as "David Duke without the baggage." What did that MEAN, anyway? Even if Kev managed to limp to the Speakership, he's already the WEAKEST Speaker in the nation's history. We haven't gotten to funding the government, raising the debt ceiling, or funding Ukraine against Russian aggression. Whoever's Speaker, the next two years should be "fun." Thanks to Jonah Goldberg, his "fecal festival" observation has become part of my lexicon. So apropos for the two-year anniversary of an insurrection that sadly involved feces and urine from barbarians.

If spineless Kev-muffins wants to “play Speaker” so badly, why doesn’t he BUY a gavel and podium at Walmart or Amazon? It would be FAR cheaper and less humiliating. He could knock himself out all day and post selfies. That is the only functionality other than breathing and going to the bathroom that the “raucous caucus” appears to have mastered. The House Republicans aren’t lawmakers: they’re the logical conclusion of electing the poorly spelled, grammatically challenged comments on Facebook.

Whatever soulless deals "the Kev" promised with the "Space Lasers Caucus," the next Speaker, if it's not him, will have to continue it to maintain a modicum of sanity for as long as humanly possible before like Ryan, Cantor, Boehner, and Kev-ums to leave Arkham Asylum to save it. Al Qaeda, the Taliban (original, and 20), QAnon, MAGA, and all terrorists have the same common goal: make America (not "great”) but ungovernable. If you truly believe that “Government is not the solution to our problem, the government is the problem” (Reagan), you CAN'T ALLOW it to function for anyone other than billionaires. In such a nihilistic, sadomasochistic, Murchassen-by-proxy worldview, this demonstrated chaos to elect a Speaker, without which there IS no 118th Congress, on the second anniversary of the January 6 Insurrection is not a bug: it’s a desired, psychotic feature.

This is embarrassing and has shown the American people that the slim majority the Republicans enjoy should be erased in 2024. They should not be allowed to govern until they take their jobs more seriously than their social media followers.

‘He’s a ‘Chaos Candidate,’ and He’d Be a Chaos President,’ Jeb Bush. Truer words have never been spoken, and the chaos has become a contagion.