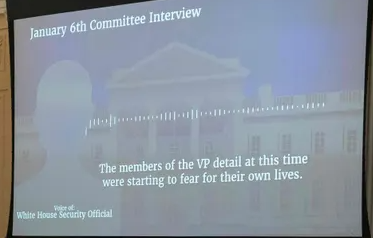 Steven Bannon's "medieval," take-no-prisoners defense rested yesterday. The three-shirt Troglodyte didn't take the stand in his defense on advice from counsel. He said more outside the courtroom than he did inside. Today is closing arguments.

The January 6th Committee ended "season 1" yesterday as well, promising more hearings in September, just in time to keep the subject fresh in voters' minds before the midterms. I hope my Fraternity Brother, Bennie Thompson, heals soon from his Covid infection.

The 45th occupant of the Oval Office looked small yesterday. The hearings didn't drop so many bombshells, in my opinion. It presented a so-called "white" privileged man that could not, and cannot, admit he lost the 2020 election. He is using that narcissism in the "Big Lie" that infects so much of our politics now. It presented that a man who can't admit after six bankruptcies he sucks at business, a con artist who steals money through fake real estate schools, border wall scams, and teasing his cult following that he's going to run again for president (any day now), is simply a spoiled, entitled brat. It's no wonder he and Bannon found each other. I'm not a right-wing podcaster with millions of listeners, many of whom he scammed with a "build the wall" boondoggle. Three-shirts, Senator Hawley, who had an impressive sprinting form on January 6th, and Baby Huey are all so-called "white" privileged men who know how to manipulate their enraged constituents, who they enraged.

They're enraged because someone told them they are "white," that God is "white," and that "white" is blessed, exalted, and privileged. All other colors fall below the apogee of the American hierarchy and caste system.

They're enraged by critical race theory, which is not taught in K-12, but what they fear is accurate history that doesn't show so-called "white" privileged men in a good light.

They're enraged because Rush Limbaugh told them to be enraged about "Feminazis" and anyone who didn't look like so-called "white" privileged men like him.

They're enraged because it's better for those who scam and steal money from 99% of the population to keep them engaged with the Reich-Wing media complex that keeps them angry at the "other." It's the "others" who took the jobs their fathers used to privilege their way to lifetime employment, pensions, and retirement. It couldn't possibly be the so-called "white" privileged multimillionaire and billionaire class, the gods that they actually worship. It can't be them: they look like (other, poorer so-called "white" men). But those same so-called "white" privileged men were in the boardrooms deciding to send those jobs overseas for profits. They don't live with you, and they don't care about you.

Their rage causes them not to invest in books or education, but in arsenals. Their rage merges lethality with hoarding disorder, the stress of no longer being the center of the citizenry, and Norman Rockwell-type images depicting diversity, driving some stark raving mad. Every human, despite shades of Melanin, can only fire one gun type once. There is no credible animal that is hunted by AR15s, Sig Sauers, or Kalashnikovs. The only animal that they have hunted are those they consider fellow human beings, and "others."

Despite the incredible pictures from the James Webb Space Telescope, I am struck by two things:

If we were to read the spectrograph of some distant exoplanet's atmosphere, we might see something resembling ourselves. The distance between us is prohibitive, we're not likely to see this world in a human lifetime. Because they're so far, arrival will be after conditions would have evolved, or dissolved over millennia.

If there have ever been other intelligent beings in the universe, they may have died off: a victim of their own misplaced hierarchical privilege and abject stupidity inhibiting spacefaring.

This rage will be the necrosis of the species. 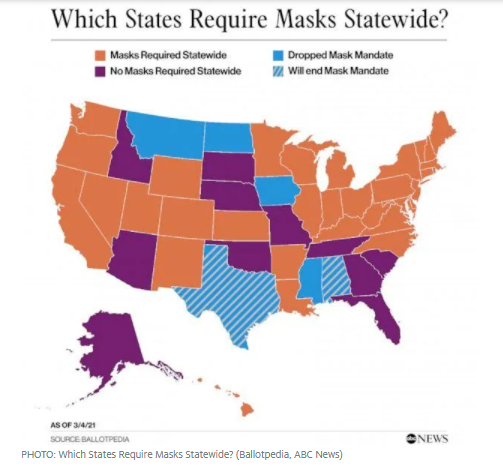 Which states have dropped mask mandates and why, Marlene Lenthang, Yahoo News

Figures often beguile me, particularly when I have the arranging of them myself; in which case the remark attributed to Disraeli would often apply with justice and force: “There are three kinds of lies: lies, damned lies, and statistics.”

Having some "fun" with mathematics. It's dark humor for all you young libertarians.

The current US population is 332,494,997 from Worldometers.info. Each link updates minute-by-minute, so by the time you read this, these figures will have changed.

For the "freedom-loving libertarians" spring breaking in Miami, or Fort Lauderdale, Florida, and Corpus Christi, Texas - a thought experiment:

So, out of 100,000 - 200 = 99,800, or 99.8% have a very good chance of not becoming "chicken of the sea," and surviving your spring break. The dilemma is, there will still be blood in the water. Blood that carries pathogens that despite your "Y" swimming lessons and the saline environment, you might ingest red tide, and suffer the consequences.

The problem is, your 0.2% chance is not zero. Under normal circumstances (and pandemics are once-in-a-century "not normal"), there's no libertarian case for this: 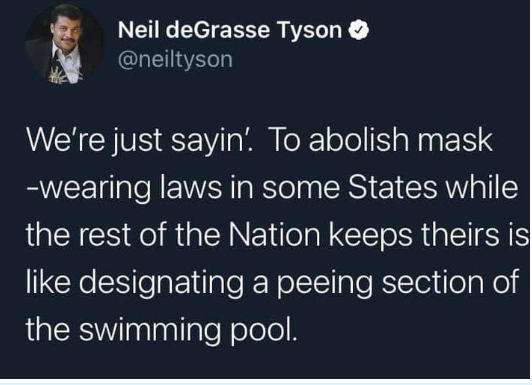