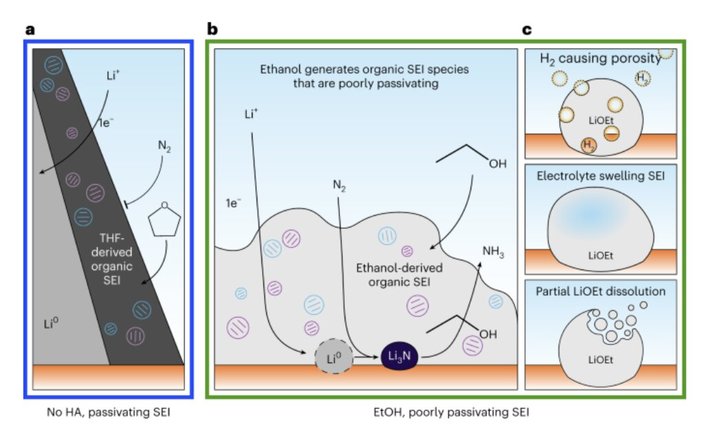 Panel A shows how the native SEI on Li metal is passivating to nitrogen, which means that no reactivity with Li metal is possible. Panel B shows that a proton donor like Ethanol will disrupt the SEI passivation and enable Li metal to react with nitrogen species. Panel C describes 3 potential mechanisms through which the proton donor can disrupt the SEI passivation. Credit: Steinberg et al.

Ammonia (NH3), the chemical compound made of nitrogen and hydrogen, currently has many valuable uses, for instance, serving as a crop fertilizer, purifying agent, and refrigerant gas. In recent years, scientists have been exploring its potential as an energy carrier to reduce global carbon emissions and help tackle global warming.

Ammonia is produced via the Haber-Bosch process, a carbon-producing industrial chemical reaction that converts nitrogen and hydrogen into NH3. As this process is known to contribute heavily to global carbon emissions, electrifying ammonia synthesis would benefit our planet.

One of the most promising strategies for electrically synthesizing ammonia at ambient conditions is using lithium metal. However, some aspects of these processes, including the properties and role of lithium's passivation layer, known as the solid electrolyte interphase (SEI), remain poorly understood.

Researchers at the Massachusetts Institute of Technology (MIT), the University of California- Los Angeles (UCLA), and the California Institute of Technology have recently conducted a study closely examining the reactivity of lithium and its SEI, as this could enhance lithium-based pathways to electrically synthesize ammonia. Their observations, published in Nature Energy, were collected using a state-of-the-art imaging method known as cryogenic transmission electron microscopy.