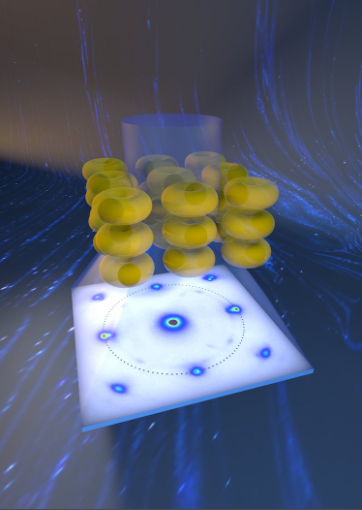 When a magnetic material is bombarded with short pulses of laser light, it loses its magnetism within femtoseconds (10–15 seconds). The spin, or angular momentum, of the electrons in the material, thus disappears almost instantly. Yet all that angular momentum cannot simply be lost. It must be conserved – somewhere.

Thanks to new ultrafast electron diffraction experiments, researchers at the University of Konstanz in Germany have now found that this “lost” angular momentum is in fact transferred from the electrons to vibrations of the material’s crystal lattice within a few hundred femtoseconds. The finding could have important implications for magnetic data storage and for developments in spintronics, a technology that exploits electron spins to process information without using much power.

In a ferromagnetic material, magnetism occurs because the magnetic moments of the material’s constituent atoms align parallel to each other. The atoms and their electrons then act as elementary electromagnets, and the magnetic fields are produced mainly by the spin of the electrons.

Because an ultrashort laser pulse can rapidly destroy this alignment, some scientists have proposed using such pulses as an off switch for magnetization, thereby enabling ultra-rapid data processing at frequencies approaching those of light. Understanding this ultrafast demagnetization process is thus crucial for developing such applications as well as for better understanding the foundations of magnetism.