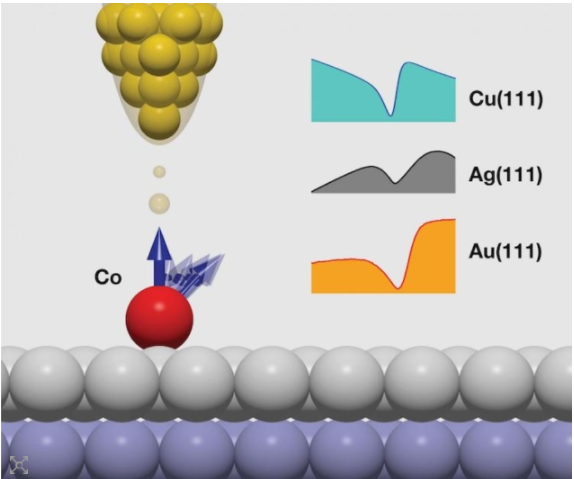 Illustration showing the atomic tip of a scanning tunneling microscope while probing a metal surface with a cobalt atom positioned on top. A characteristic dip in the measurement results is found on surfaces made of copper as well as silver and gold. Courtesy: Forschungszentrum Jülich

A new type of quasiparticle – dubbed the “spinaron” by the scientists who discovered it – could be responsible for a magnetic phenomenon that is usually attributed to the Kondo effect. The research, which was carried out by Samir Lounis and colleagues at Germany’s Forschungszentrum Jülich, casts doubt on current theories of the Kondo effect and could have implications for data storage and processing based on structures such as quantum dots.

The electrical resistance of most metals decreases as the temperature drops. Metals containing magnetic impurities, however, behave differently. Below a certain threshold temperature, their electrical resistance increases rapidly and continues to increase as the temperature drops further. First spotted in the 1930s, this phenomenon became known as the Kondo effect after the Japanese theoretical physicist Jun Kondo published an explanation for it in 1964.

Superconductivity and magnetism don’t usually mix. When a superconductor is placed in a magnetic field, it expels the field from its bulk through the Meissner effect; a strong enough field destroys the superconducting state entirely. In the vast majority of superconductors, electrons form spin-singlet pairs, with s– or d-wave symmetry, that are twisted apart by the field. Even the rare p-wave, spin-triplet superconductors (such as strontium ruthenate; see Physics Today, December 2006, page 23) are limited in how strong a magnetic field they can tolerate.
Last year the list of unusual superconductors grew by one, when Nicholas Butch and colleagues at NIST and the University of Maryland discovered spin-triplet superconductivity in uranium telluride, or UTe2. (The paper reporting their results, although submitted in October 2018, wasn’t published until this August; in the intervening time, the discovery was confirmed by a team of researchers at Tohoku University in Japan and Grenoble Alps University in France.)