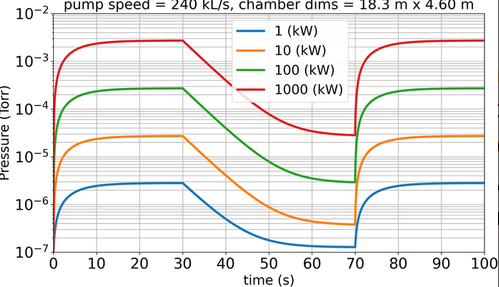 FIG. 1. Temporal evolution of chamber pressure assuming nominal operation for 30 s followed by a 40 s interval with flow rate reduced 100×. The colors correspond to 1 kW, 10 kW, 100 kW, and 1 MW power levels. The process is then repeated.

Hall effect thrusters operating at power levels in excess of several hundreds of kilowatts have been identified as enabling technologies for applications such as lunar tugs, large satellite orbital transfer vehicles, and solar system exploration. These large thrusters introduce significant testing challenges due to the propellant flow rate exceeding the pumping speed available in most laboratories. Even with proposed upgrades in mind, the likelihood that multiple vacuum facilities will exist in the near future to allow long-duration testing of high-power Hall thrusters operating at power levels in excess of 100 kW remains extremely low. In this article, we numerically explore the feasibility of testing Hall thrusters in a quasi-steady mode defined by pulsing the mass flow rate between a nominal and a low value. Our simulations indicate that sub-second durations available before the chamber reaches critical pressure are sufficiently long to achieve the steady-state current and flow field distributions, allowing us to characterize thruster performance and the near plume region.

Hall effect thrusters (HETs) are spacecraft electric propulsion (EP) devices routinely used for orbit raising, repositioning, and solar system exploration applications. To date, the highest power Hall thruster flown is the 4.5 kW BPT-4000 launched in 2010 aboard the Advanced EHF satellite1 (which the HET helped to deliver to the correct orbit after a failure of the primary chemical booster), although a 13 kW system is being readied for near-term flight operation as part of the Lunar Gateway,2 and thrusters at 503,4–100 kWs power levels have been demonstrated in the laboratory. Solar cell advancements and a renewed interest in nuclear power have led the aerospace community to consider the use of Hall thrusters operating at even higher power levels. Multi-hundred kW EP systems would offer an economical solution for LEO to GEO orbit raising or for the deployment of an Earth-to-Moon delivery tug, and power levels in excess of 600 kW could be utilized for crewed transport to Mars.5–9 While such power levels could be delivered using existing devices, a single large thruster requires less system mass and has a reduced footprint than a cluster of smaller devices.10