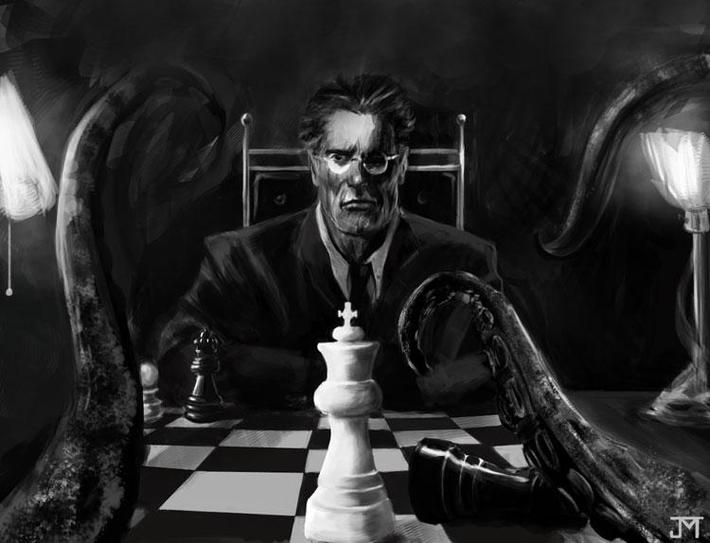 Flash Fiction by Thaddeus Howze
500 Words
"Are you going to eat that? I'm starving." The voice, like caged thunder, rumbled as Harold held his head in his hands.
"Knock yourself out."
A pair of twisted tentacles composed of degenerate exotic matter reached across the dimensional divide and hefted the Dave's Special. Surprised by the effort necessary, one tentacle removed the lumpy Kaiser roll to peer into the confines within; heaped with fixings, sporting an array of meats, sauces, twisted slab bacon, with tiny poppy seeds scattered across the top.
Amen-mat, with his one enormous eye, grew dizzy staring at the huge sandwich. It took several tugs to drag it across the dimensional boundary into his four-dimensional space. Between bouts of enthusiastic chewing, Amen asked "What's wrong, old man?"
Harold sat up. "I can't pay the rent." The corner he was looking into was filled with newspapers. Harold was a hoarder. No, not the kind that lives with fifty cats. He was worse than that. Harold was the neat and reasonable kind. Piles, organized with tabs, dates, and locations; a clean and functional chaos. Yet it still disturbed people when they came to see him. After a while they just stopped.
It left more time for him to focus on his conflict with Amen-mat, inter-dimensional invader and game aficionado. The two moved through the apartment engaged in multiple forms of warfare across the centuries; chess, Go, Parcheesi, backgammon and Mastermind. No game was too small or strange. Alone for decades, a shut-in, Harold played chess alone until Amen-mat, during an invasion to subjugate the Earth, manifested in his loft to play chess.
"We talked about this a few years ago," Amen offered.
"No. I am not coming to live with you."
"Why not? You'd have an entire dimension to yourself."
"Because I know what you are."
"A soul-devouring monster feasting on Human greed and suffering."
"Yes. There's that."
"That's not the deal-breaker?"
"No. People who make deals with monsters get what they deserve."
"Then, what's the problem?"
"What about my stuff? What about Dave's? You don't have a Dave's there, do you?"
"No. And after eating that last one, I understand why you would be slow to leave. But I have an idea. Let's start moving your stuff." Harold twitched involuntarily as multiple tentacles appeared all over the room and began to size up the task.
"Don't worry, I won't change a thing. I promise." By the end of the day, the house was empty, walls scrubbed sporting a light lavender scent; security deposit reclaimed, Harold Turner moved out of his flat an into an entire dimension of his own, separate from Amen-Mat's.
Meanwhile, at Dave's, a corner light blows and can't be repaired. Sandwiches disappear. Minutes later, money appears to pay for the purloined hoagie. A pragmatic man, Dave never questions. The tentacle was, for all of its strangeness, a generous tipper.
On rainy evenings when business is slow, he occasionally hears the word 'checkmate', followed by free-rolling thunder which sounds suspiciously like laughter between old friends.
-----------------------------------------------------------------
WRITING PROMPT: HUMOUR/COMEDY
Your story must include a sandwich.
Your story cannot be longer than 500 words
Your story must include the following five words:
DIZZY, EXOTIC, LUMPY, TINY, TWISTED.
-----------------------------------------------------------------
Read more… 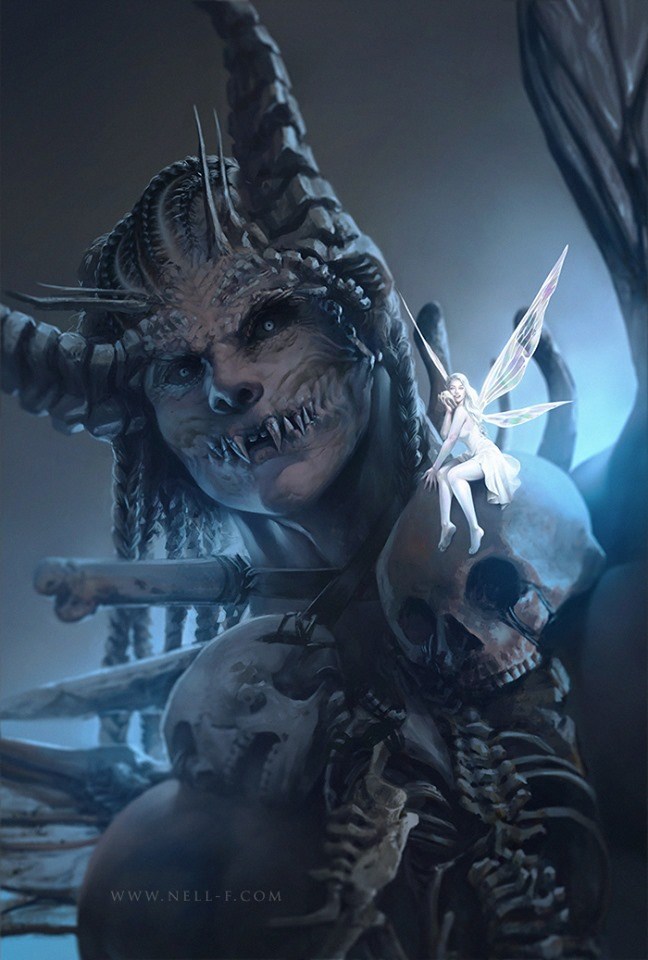 "You have to leave him." The matter of fact tone left nothing to the imagination. It wasn't a command, but it wasn't a request. It had all the finality of the grave.

The captain's black eyes gave no quarter among the remnant of twenty men, of which only five remained. If it meant all of their lives, this mission would be done.

He touched the small box for the hundredth time, again hidden inside his armor, an object worth more than all of their lives, twice. Its dark radiance burned into his chest and a phlegm-filled cough followed as he thought about it.

"But sir," Lon began, "he can still walk." The farm boy staggered a bit under his bigger companion's weight but he wanted to make a case which seemed reasonable.

Alirr, the giant of this group held up the other side of Sdi, the Quick, two of his best warriors saddled with the dead weight of a third.

"Captain. I understand. I would only endanger the mission. I will do my best to hold out here until you can secure passage," Sdi responded cuffing his friends in the process.

They knew they could not stay with him. The two eased him down next to an ironwood tree, a fortune behind his head, if he could survive to get it to the border of the forest. Without an army of men, nothing ever does. The Denetheian Forest, a place of mystery, despair and disappearances. Few who ever entered it, leave.

It was only the desperation of men with nothing but legend to fall upon, came to seek, her. Tylwyth Teg Esgyrn, in the old tongue, fools who lived on the edge of this dire wood, called her the Bone Fairy.

A being so fell, it is claimed to have destroyed an entire army which sought to claim this forest for their own. A fortune in ironwood, they would the most formidable armor and weapons anywhere.

They marched upon the forest, or so the legends went, with pomp and pageantry. The former kingdom of Deneth, for which this forest gained its name, and reputation. The elves and other creatures which lived in this forest became legends that night.

It was said by the few survivors, the battle between the Fey and Men was awe-inspiring, its like having been seen only a few times in recorded history. The Men who survived claimed they were within the reach of victory when their army began to fall.

It was a wind which swept through the ranks, and as it passed, armor rustled, weapons flickered and fell flat to the ground, surrounding skin and twitching organs, which spasmed pitifully, mewling like tortured beasts, before they bubbled and fell silent, moments later, rustling among the grass, until the twitching fell silent.

At first, the men didn't understand what they were seeing, the wind came from the trees, leaves rustling, a sudden burst of movement and wave after wave of the Human army fell, for all intents and purposes dead, boneless.

The army's morale broke in light of this unexpected magic, unlike anything they knew existed. They tried to flee. Only those who made it to the edge of the forest survived. Some were partially affected and lost limbs, with flesh that needed to be cut away, because the bones simply vanished as they were fleeing the forest.

Of ten thousand, less than two hundred returned home. As they fled, they were told to leave the valley and never return. Or the same thing would happen to everyone who remained in three days.

No Man has lived in this valley for a hundred years, and few dared to tread here except in the brightest of days with the boldest of Men. The lure of Ironwood was the one thing men would risk life and limb for. And often did.

Now with three men, The Captain Hathor was to return to this legendary slaughterhouse in search of this mythic horror.

As he turned back to his men setting up camp, he feels a cold wind coming from the direction they are headed. As he turns to his men, he watches them slump, flopping bonelessly to the ground, their moist gurgling their final warning.

Hathor turned back and saw it. A creature of bones and wings, twice the size of a man, a mouth filled with teeth who dreamed of being sharper teeth, the creature floated silently, whispering into and out of sight. Smaller lights fluttered around it.

One of the smaller lights flew to Hathor's face and it appeared to be a tiny woman with flickering wings. It would have been beautiful save its otherworldly aura, its sharp and toothy grin and the more horrifying and larger version which accompanied it.

A tiny voice rang out. "The Queen has accepted your tribute. Make your case and be quick about it, Human."

Reaching into his coat he pulls forth a black diamond, the size of a quail's egg. It shone with a nacreous inner light, and the smaller creatures shied away, vanishing into the forest.

"Are you this desperate you would try to geas me into service?"

"We are. We need your help, your terrible majesty." The captain squeezed the gem and he began to age, weaken and fell to his knees. "We would draft you into our service because what is coming is a thousand times worse than you. We would dare anything."

The Queen, flickered trying to escape the geas forming around her, its black tendrils holding on to her no matter where she shifted, no matter how hard she moved between worlds, the spell found her.

"Go west, your majesty. You will see it. You cannot help but. We geas you to help us, because when they are done with us, they will come for you."

The captain, now an old man, falls over, becoming dust as the spell, the magical compunction now delivered, the Queen had been bound and would go west, whether she wanted to or not.

She screamed, her howl heard across the forest. Then she considered the feast ahead as she sent her minions to blacken the sky before her. Wars were always such good eating.

Horror in Your Funk (2).rtf.docx