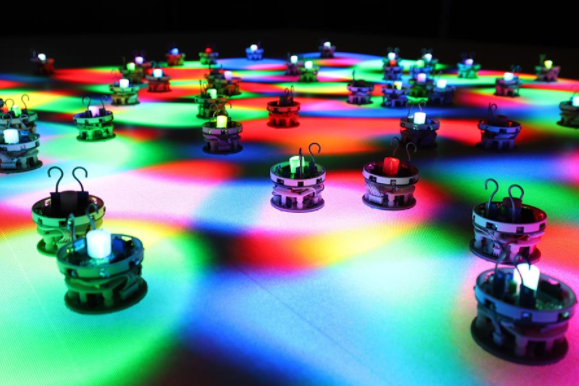 Chemotherapy disrupts cancer cells’ ability to reproduce by frustrating cell division and damaging the cells’ DNA. In response to the pharmaceutical onslaught, cancer cells acquire mutations that reduce the therapy’s effectiveness. Compounding the challenge of fighting cancer: Under chemical and other stresses, mutation rates increase.

A team led by Princeton University’s Robert Austin and Chongqing University’s Liyu Liu has developed a novel approach to study—and potentially thwart—cancer cells’ adaptation to chemotherapy. Their cancer cell analogs are wheeled, cylindrical robots about 65 mm in diameter and 60 mm in height (see photo above). Fifty of the robots roll independently of each other over a square table, whose 4.2 × 4.2 m2 surface is covered by 2.7 million LEDs (see photo below). Light from the LEDs serves as the robots’ food. Once a robot has “eaten” the light beneath it, the corresponding LEDs are dimmed until they recover a fixed time later.

The bottom surface of each robot is equipped with four semiconductor-based sensors that can detect the intensities and spatial gradients of the three colors of light emitted by the light table: red, green, and blue (RGB). Each robot’s six-byte genome analog determines how sensitive it is to the three colors. The sensitivity, in turn, determines how readily the robot moves in response to the colors’ intensities and spatial gradients.