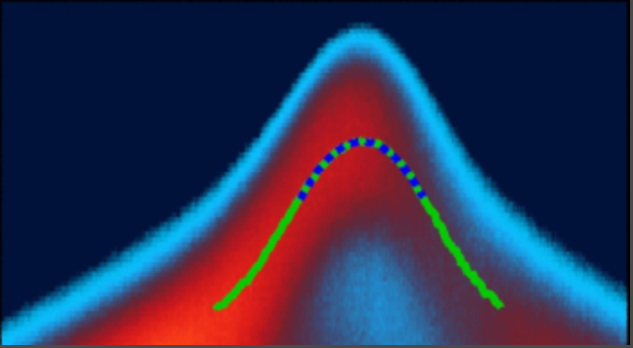 The effective mass of the electrons can be derived from the curvature around the maxima of the ARPES measurement data (image, detail). (Courtesy: HZB)

A longstanding explanation for why perovskite materials make such good solar cells has been cast into doubt thanks to new measurements. Previously, physicists ascribed the favorable optoelectronic properties of lead halide perovskites to the behavior of quasiparticles called polarons within the material’s crystal lattice. Now, however, detailed experiments at Germany’s BESSY II synchrotron revealed that no large polarons are present. The work sheds fresh light on how perovskites can be optimized for real-world applications, including light-emitting diodes, semiconductor lasers, and radiation detectors as well as solar cells.

Lead halide perovskites belong to a family of crystalline materials with an ABX3 structure, where A is cesium, methylammonium (MA), or formamidinium (FA); B is lead or tin; and X is chlorine, bromine, or iodine. They are promising candidates for thin-film solar cells and other optoelectronic devices because their tuneable bandgaps enable them to absorb light over a broad range of wavelengths in the solar spectrum. Charge carriers (electrons and holes) also diffuse through them over long distances. These excellent properties give perovskite solar cells a power conversion efficiency of more than 18%, placing them on a par with established solar-cell materials such as silicon, gallium arsenide, and cadmium telluride.

Researchers are still unsure, however, exactly why charge carriers travel so well in perovskites, especially since perovskites contain far more defects than established solar-cell materials. One hypothesis is that polarons – composite particles made up of an electron surrounded by a cloud of ionic phonons, or lattice vibrations – act as screens, preventing charge carriers from interacting with the defects.