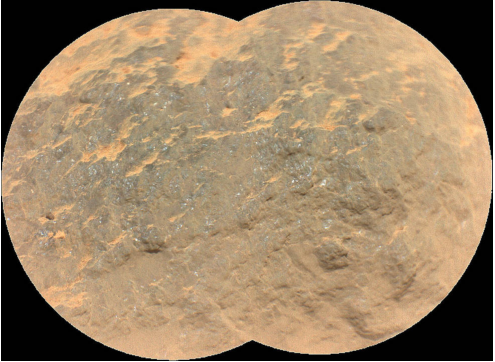 Combining two images, this mosaic shows a close-up view of the rock target named “Yeehgo” from the SuperCam instrument on NASA’s Perseverance rover on Mars. The component images were taken by SuperCam’s Remote Micro-Imager (RMI). To be compatible with the rover’s software, “Yeehgo” is an alternative spelling of “Yéigo,” the Navajo word for diligent.
Credits: NASA/JPL-Caltech/LANL/CNES/CNRS/ASU/MSSS
Annotated version

Data from the powerful science tool includes sounds of its laser zapping a rock in order to test what it’s made of.

The first readings from the SuperCam instrument aboard NASA’s Perseverance rover have arrived on Earth. SuperCam was developed jointly by the Los Alamos National Laboratory (LANL) in New Mexico and a consortium of French research laboratories under the auspices of the Centre National d’Etudes Spatiales (CNES). The instrument delivered data to the French Space Agency’s operations center in Toulouse that includes the first audio of laser zaps on another planet.

“It is amazing to see SuperCam working so well on Mars,” said Roger Wiens, the principal investigator for Perseverance’s SuperCam instrument from Los Alamos National Laboratory in New Mexico. “When we first dreamed up this instrument eight years ago, we worried that we were being way too ambitious. Now it is up there working like a charm.”

Perched atop the rover’s mast, SuperCam’s 12-pound (5.6-kilogram) sensor head can perform five types of analyses to study Mars’ geology and help scientists choose which rocks the rover should sample in its search for signs of ancient microbial life. Since the rover’s Feb. 18 touchdown, the mission has been performing health checks on all of its systems and subsystems. Early data from SuperCam tests – including sounds from the Red Planet – have been intriguing.

“The sounds acquired are remarkable quality says Naomi Murdoch, a research scientist, and lecturer at the ISAE-SUPAERO aerospace engineering school in Toulouse. “It’s incredible to think that we’re going to do science with the first sounds ever recorded on the surface of Mars!”