The black and amber Thicordian Dragons hovered above the planet Zaire. From a distance, the star-ships gave the illusion of a glowing, wafer-thin discs. But drawing closer this mirage was blown apart. Dragons were actually fl “Lightning ‘bout to strike a pine.”

District Attorney Herman Lowe sat at the table wearing his best suspenders and stove pipe pants, his Stetson propped on the table before him. His date for the night, Marissa, a

Here's an excerpt from Colony: A Space Opera. I'll drop the full novel later this year. You can read the novella free at smashwords: http://www.smashwords.com/books/view/159250

Swatting away clouds of mutant flies, a young white man with  brown hair Michelle, a slender, brown girl of 18 leaned against the magnolia tree watching them. The couple got out of their car: a white man around 35 with windswept short blond hair and his elegant wife also in her thirties with shoulder length black hair. T

(Sneak peek of my forthcoming novel)

In the North air traffic tower above Old San Francisco, Willie, a short light-brown man with a thick afro, sat in his swivel chair with jazz flowing through his ear plugs and an open book on his lap. Music was one

They were riding the steam train again, sitting behind Ripple, the edges of their seats smudged with black and velvet. The train lurched to a stop, and the doors slid open.

Beyond was utter darkness.

“This is our stop!” Ripple shouted. Even

**** moved through patchy woods. The Topaz breezes had begun to blow, and he was cold and hungry. He thought longingly of his comfortable little hideaway, that he'd spent so much time putting together.

The Switch . . . the story that started it all!

Z100 stood on the tube platform waiting for the next car. She was dressed in a one-piece, white jumpsuit and thigh-high boots: standard dress for the upper city. Pods only seated three to a car and were propelled by compressed ai 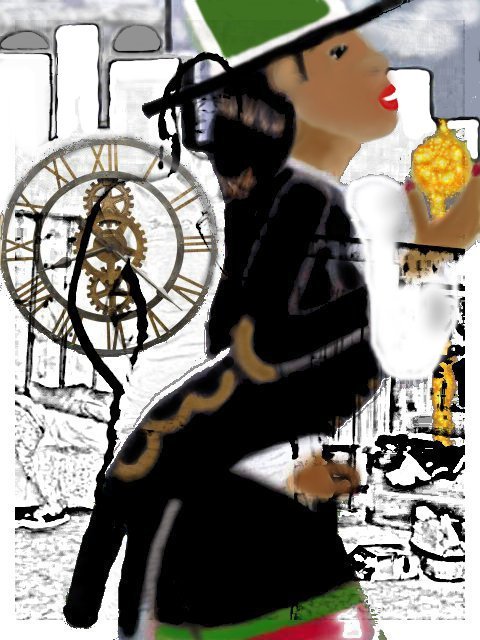 What's happening fam :)? My Probe giveaway went very well, so I've decided to giveaway 2 pdf copies of my first novel Immortal. I think it's a great way to generate publicity for my upcoming novels Immortal 4: Collision of Time & The Switch: Clockwor

She was walking through the mist, it clothed her – draped about her –
the sheerest of garments. Longing suffused her being. She was
yearning for the one who had first stepped out of her dreams...when?

She was Annabelle’s shadow, trailing the dark woman as she rode in horse drawn carriages, sipped wine on balconies, danced in chandelier lit ballrooms. But she always returned home to her quarter alongside the river.

Now the twin moons shined through

SHE was in the basement again. It was pitch black, the only
illumination a glowing, quarter moon etched into the floor. A burst of
light split the darkness, and she moaned low in her throat.
Please, I don’t want to see anymore…I don’t want to
Read more…
Started by Valjeanne Jeffers
0 Replies

Now, in Fisherman’s Alley at the Salty Dog, Citizens sat in booths lining the walls or perched on bar stools. Among the laughing crowd were Mark and Layla, sharing
a drink at the bar.

Dumas 3, a muscular, dark man with thick hair clumped about his face, opened the door to the cramped, one bedroom flat he shared with his father, Wilton2. It was hot, and he stripped off his work shirt; then went into the kitchen to warm their dinner

Oh! He was close! She could feel him, smell him in this dream-world. How she yearned for him... And he was there. She brushed her lips over his copper-brown cheek and then sought his lips... his taste like honeyed wild flowers.

She burrowed down in the leaves to sleep. Karla didn't know how she was controlling the transformation and she didn't care. Animal that she was, she only knew that her fur was soft and cushioned the hard soil beneath her. That her stomach was full wi

The lights of Topaz bridge glimmered in the distance. But no one crossed the bridge: not on foot or by vehicle. The streets were deadly quiet. It was eight pm. Curfew was in effect for the next ten hours. Violation was punishable by death

The Nature of Shape Shifting

Shape Shifting, in my humble opinion is more than changing from a human into a beast. It's a shift in reality, in personality. In the old horror flicks (which I love) a woman or man is bitten and becomes a bloodthirsty (sometimes) sex-crazed beast. A

Read more…
Started by Valjeanne Jeffers
0 Replies
of 2 Next