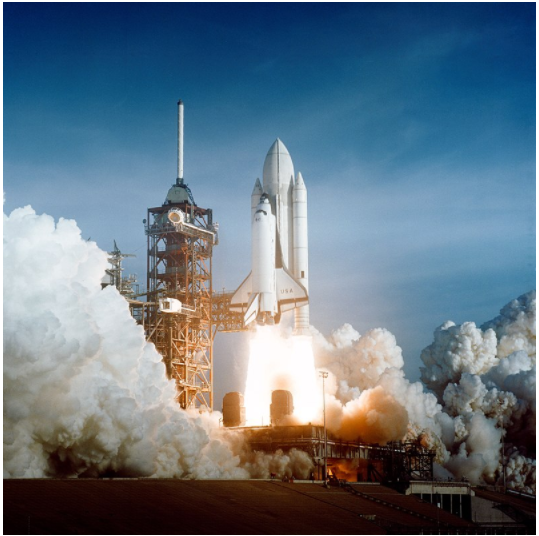 The first mission of the Space Shuttle Program, STS-1, blasts off from launch pad 39A on April 12, 1981, attempting to kick off a new era of rapid access to space.

In April 1981, John Young — America’s premier astronaut and one of only 12 people to ever walk on the Moon — was training with co-pilot Bob Crippen for STS-1, the maiden voyage of the space shuttle Columbia. Though eager, Young harbored no illusions that he might never return from this first mission of the Space Shuttle Program.

After rocketing into space, Columbia aimed to circle our planet 36 times over two days. But then, unlike the previous spacecraft, it would glide back to Earth, landing on a runway like an airplane. NASA hoped its reusable fleet of four shuttles — Atlantis, Challenger, Discovery, and Columbia — would launch weekly with crews of up to seven, allowing more rapid access to space than ever before. The Space Shuttle Program promised to both revolutionize and routinize spaceflight.

But, as with all cutting-edge technologies, the risks were severe. A month before STS-1, as Columbia sat on Pad 39A at the Kennedy Space Center in Florida, several technicians were asphyxiated by nitrogen fumes while working in the shuttle’s aft fuselage. Two of them later succumbed to their injuries. The accident served as a deadly reminder that spaceflight is a dangerous business, even when still on Earth.