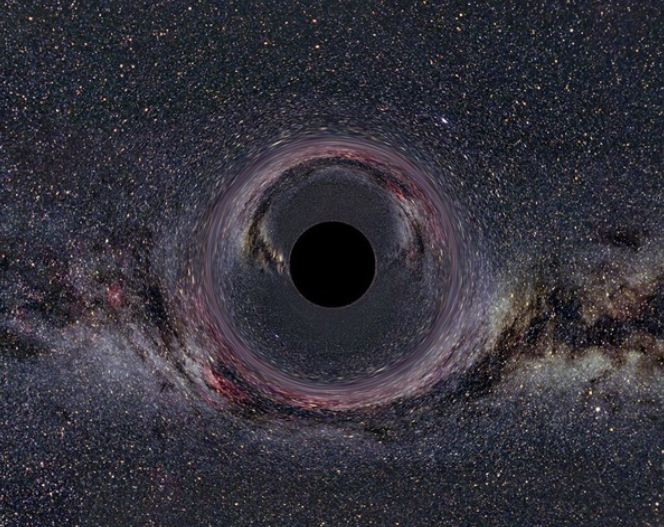 A lone black hole gives off no light - but its gravity does distort the path of light traveling around it. Ute Kraus (background Milky Way panorama: Axel Mellinger), Institute of Physics, Universität Hildesheim

Each second, a brand new baby black hole is born somewhere in the cosmos as a massive star collapses under its own weight.

But black holes themselves are invisible. Historically, astronomers have only been able to detect these stellar-mass black holes when they are acting on a companion.

Now, a team of scientists has made the first-ever confirmed detection of a stellar-mass black hole that’s completely alone. The discovery opens up the possibility of finding even more — an exciting prospect, considering there should be around 100 million such “rogue” black holes drifting through our galaxy unseen.

Relying on the neighbors

Black holes are difficult to find because they don’t shine like stars. Anything with mass warps the fabric of space-time, and the greater the mass, the more extreme the warp. Black holes pack so much mass into such a tiny area that space folds back in on itself. That means that if anything, even light, gets too close, its path will always bend back toward the center of the black hole.

Astronomers have found a couple hundred of these ghostly goliaths indirectly, by seeing how they influence their surroundings. They’ve identified around 20 black holes of the small, stellar-mass variety in our galaxy by watching as stars are devoured by invisible companions. As the black hole pulls matter from its neighbor, the material forms a swirling, glowing accretion disk that signals the black hole’s presence.