(Trolling) I'm looking forward to the conspiracy theories on grainy YouTube homemade videos to "prove" the continuing faking of any manned moon landing. o_9
Artemis, in Greek religion, the goddess of wild animals, the hunt, and vegetation, and of chastity and childbirth; she was identified by the Romans with Diana. Artemis was the daughter of Zeus and Leto and the twin sister of Apollo. Source: Encyclopedia Britannica
With the Artemis program, NASA will land the first woman and next man on the Moon by 2024, using innovative technologies to explore more of the lunar surface than ever before. We will collaborate with our commercial and international partners and establish sustainable exploration by 2028. Then, we will use what we learn on and around the Moon to take the next giant leap – sending astronauts to Mars. 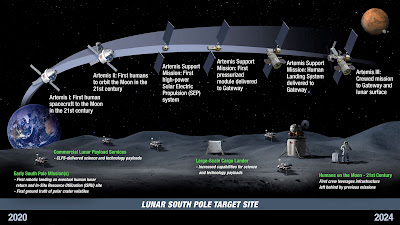 Slowly but surely, the surface of Saturn’s strange moon Titan is being revealed. Researchers have made the first map of the geology of Titan’s entire surface, and it will eventually help us figure out what the climate is like there.
Titan’s atmosphere is full of a thick, orange haze that blocks visible light from reaching the surface, making it difficult for spacecraft to take pictures. NASA’s Cassini spacecraft, which orbited Saturn from 2004 to 2017, took radar and infrared data of Titan’s surface, giving researchers a hint of the terrain below.
Rosaly Lopes at NASA’s Jet Propulsion Laboratory in California and her colleagues assembled those observations and placed each area, or unit, into one of six categories: lakes, craters, dunes, plains, hummocky terrain – meaning hills and mountains – and labyrinth, which looks like heavily eroded plateaus. They then made a map of where each of those terrains exists on Titan’s surface.

We have the first full map of the weird surface features of Titan
Leah Crane, New Scientist

We've all fantasized of visiting somewhere exotic. For most of us, that dream spot is somewhere on Earth. But for some, the ultimate must-see destination isn't on our planet at all.
NASA is currently planning a series of 37 rocket launches, both robotic and crewed, that will culminate with the 2028 deployment of the first components for along-term lunar base, according to recently leaked documents obtained by Ars Technica. An outpost on the Moon is surely an exciting prospect for both science geeks and prospective solar-system sightseers, but some believe NASA’s timeline is a too ambitious to be realistic.
However, unlike NASA, who not long ago adjusted their sights from Mars mission to a return to the Moon, the European Space Agency (ESA) has already spent almost five years quietly planning a permanent lunar settlement. And while building it may take a few decades, if done right, it could serve the entire world — sightseers included — for many more decades to come.

On 20 July 1969, Apollo 11 astronauts Neil Armstrong and Edwin “Buzz” Aldrin landed on the Moon while Michael Collins orbited in the command module Columbia. “Tranquility Base here. The Eagle has landed”became one of the most iconic statements of the Apollo experience and set the stage for five additional Apollo landings.
Each of the Apollo missions explored carefully selected landing sites and conducted a variety of experiments to probe the lunar interior and measure the solar wind. Well-trained astronauts made geologic observations and collected samples of rock and regolith, the impact-generated layer of debris that composes the lunar surface. Over a half century of study, the samples have revealed abundant information not only about the Moon’s origin and history but also about the workings of our solar system.
APOLLO 11
Results from the Apollo 11 mission established key paradigms of lunar and planetary science. After a harrowing descent to the surface, Armstrong set the Eagle down on the cratered basaltic plains of Mare Tranquillitatis. Extravehicular activity was brief—just two and a half hours during that first mission—and included setting up surface experiments and exploring a small cluster of craters near the lunar module and Little West Crater some 60 meters away, as shown in figure 1. Aldrin’s iconic Apollo 11 boot print photo revealed much about the lunar soil, including its fine-grained nature, its cohesiveness, and its ability to pack tightly together.

The Moon is shrinking as its interior cools, getting more than about 150 feet (50 meters) skinnier over the last several hundred million years. Just as a grape wrinkles as it shrinks down to a raisin, the Moon gets wrinkles as it shrinks. Unlike the flexible skin on a grape, the Moon’s surface crust is brittle, so it breaks as the Moon shrinks, forming “thrust faults” where one section of crust is pushed up over a neighboring part.
“Our analysis gives the first evidence that these faults are still active and likely producing moonquakes today as the Moon continues to gradually cool and shrink,” said Thomas Watters, senior scientist in the Center for Earth and Planetary Studies at the Smithsonian’s National Air and Space Museum in Washington. “Some of these quakes can be fairly strong, around five on the Richter scale.”
Watters is lead author of a study that analyzed data from four seismometers placed on the Moon by the Apollo astronauts using an algorithm, or mathematical program, developed to pinpoint quake locations detected by a sparse seismic network. The algorithm gave a better estimate of moonquake locations. Seismometers are instruments that measure the shaking produced by quakes, recording the arrival time and strength of various quake waves to get a location estimate, called an epicenter. The study was published May 13 in Nature Geoscience.