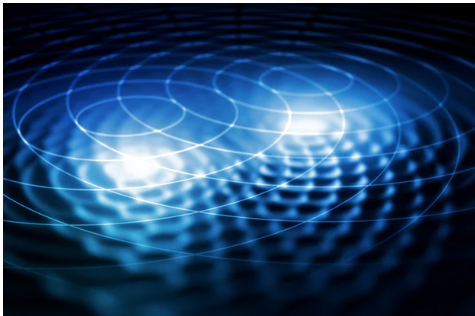 For the first time, scientists have observed quantum interference—a wavelike interaction between particles related to the weird quantum phenomenon of entanglement—occurring between two different kinds of particles. The discovery could help physicists understand what goes on inside an atomic nucleus.

Particles act as both particles and waves. And interference is the ability of one particle’s wavelike action to diminish or amplify the action of other quantum particles like two boat wakes crossing in a lake. Sometimes the overlapping waves add up to a bigger wave, and sometimes they cancel out, erasing it. This interference occurs because of entanglement, one of the weirder aspects of quantum physics, which was predicted in the 1930s and has been experimentally observed since the 1970s. When entangled, the quantum states of multiple particles are linked so that measurements of one will correlate with measurements of the others, even if one is on Jupiter and another is on your front lawn.

Dissimilar particles can sometimes become entangled, but until now, these [mismatched] entangled particles weren’t known to interfere with one another. That’s because part of measuring interference relies on two wavelike particles being indistinguishable from each other. Imagine two photons, or particles of light, from two separate sources. If you were to detect these photons, there would be no way to determine which source each came from because there is no way to tell which photon is which. Thanks to the quantum laws governing these very small particles, this ambiguity is actually measurable: all the possible histories of the two identical photons interfere with one another, creating new patterns in particles’ final wavelike actions.

Breaking the rules is exciting, especially if they have been held for a long time. This is true not just in life but also in particle physics. Here the rule I’m thinking of is called “lepton flavor universality,” and it is one of the predictions of our Standard Model of particle physics, which describes all the known fundamental particles and their interactions (except for gravity). For several decades after the invention of the Standard Model, particles seemed to obey this rule.

Things started to change in 2004 when the E821 experiment at Brookhaven National Laboratory on Long Island announced its measurement of a property of the muon—a heavy version of the electron—known as its g-factor. The measurement wasn’t what the Standard Model predicted. Muons and electrons are both parts of a class of particles called leptons (along with a third particle, the tau, as well as the three generations of neutrinos). The rule of lepton flavor universality says that because electrons and muons are charged leptons, they should all interact with other particles in the same way (barring small differences related to the Higgs particle). If they don’t, then they violate lepton flavor universality—and the unexpected g-factor measurement suggested that’s just what was happening.

If particles really were breaking this rule, that would be exciting in its own right and also because physicists believe that the Standard Model can’t be the ultimate theory of nature. The theory doesn’t explain why neutrinos have mass, what makes up the invisible dark matter that seems to dominate the cosmos, or why matter won out over antimatter in the early universe. Therefore, the Standard Model must be merely an approximate description that we will need to supplement by adding new particles and interactions. Physicists have proposed a huge number of such extensions, but at most one of these theories can be correct, and so far none of them has received any direct confirmation. A measured violation of the Standard Model would be a flashlight pointing the way toward this higher theory we seek.

Rule-Breaking Particles Pop Up in Experiments around the World, Andreas Crivellin, Scientific American 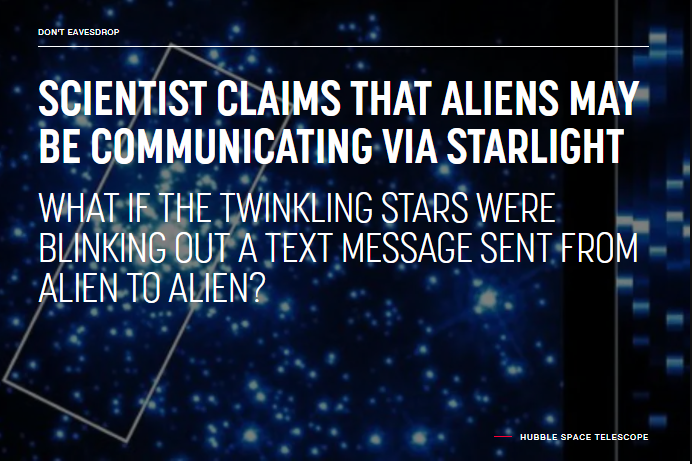 When we gaze up at the night sky, we might be accidentally eavesdropping on an alien conversation.

At least, that’s according to Imperial College London quantum physicist Terry Rudolph, who last week published preprint research theorizing that an advanced extraterrestrial civilization might alter the light coming off stars in order to communicate across a great distance, almost like a series of interstellar smoke signals.

The physics of the ordeal gets a bit dense — which is probably reasonable if aliens are rapidly communicating across star systems — but the basic idea is to use entangled photons from different stars to transmit messages that appear to be random twinkling to any nosy onlookers.

The idea, Rudolph notes, is technically possible as far as the physics are concerned, but pure speculation when it comes to any discussion of alien technology. But as he writes in the paper, any entangled communication among stars “can be rendered in principle indiscernible to those of us excluded from the conversation.”

So if there were a mega-advanced civilization out there colonizing the Milky Way galaxy, communication along the lines of what Rudolph has proposed could explain why we haven’t found any evidence of life beyond Earth.

Scientists Claim That Aliens May Be Communicating Via Starlight, Dan Robitzski, Futurism

Scientists just captured the first-ever photo of the phenomenon dubbed "spooky action at a distance" by Albert Einstein. That phenomenon, called quantum entanglement, describes a situation where particles can remain connected such that the physical properties of one will affect the other, no matter the distance (even miles) between them.
Einstein hated the idea, since it violated classical descriptions of the world. So he proposed one way that entanglement could coexist with classical physics — if there existed an unknown, "hidden" variable that acted as a messenger between the pair of entangled particles, keeping their fates entwined. [18 Times Quantum Particles Blew Our Minds in 2018]
There was just one problem: There was no way to test whether Einstein's view — or the stranger alternative, in which particles "communicate" faster than the speed of light and particles have no objective state until they are observed — was true. Finally, in the 1960s, physicist Sir John Bell came up with a test that disproves the existence of these hidden variables — which would mean that the quantum world is extremely weird.
This is "the pivotal test of quantum entanglement," said senior author Miles Padgett, who holds the Kelvin Chair of Natural Philosophy and is a professor of physics and astronomy at the University of Glasgow in Scotland. Though people have been using quantum entanglement and Bell's inequalities in applications such as quantum computing and cryptography, "this is the first time anyone has used a camera to confirm [it]."
To take the photo, Padgett and his team first had to entangle photons, or light particles, using a tried-and-true method. They hit a crystal with an ultraviolet (UV) laser, and some of those photons from the laser broke apart into two photons. "Due to conservation of both energy and momentum, each resulting pair [of] photons are entangled," Padgett said.