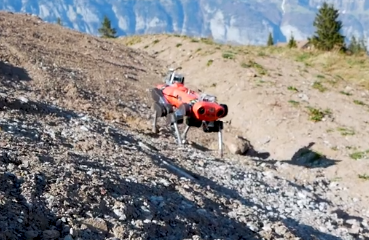 Legged locomotion can extend the operational domain of robots to some of the most challenging environments on Earth. However, conventional controllers for legged locomotion are based on elaborate state machines that explicitly trigger the execution of motion primitives and reflexes. These designs have increased in complexity but fallen short of the generality and robustness of animal locomotion. Here, we present a robust controller for blind quadrupedal locomotion in challenging natural environments. Our approach incorporates proprioceptive feedback in locomotion control and demonstrates zero-shot generalization from simulation to natural environments. The controller is trained by reinforcement learning in simulation. The controller is driven by a neural network policy that acts on a stream of proprioceptive signals. The controller retains its robustness under conditions that were never encountered during training: deformable terrains such as mud and snow, dynamic footholds such as rubble, and overground impediments such as thick vegetation and gushing water. The presented work indicates that robust locomotion in natural environments can be achieved by training in simple domains.