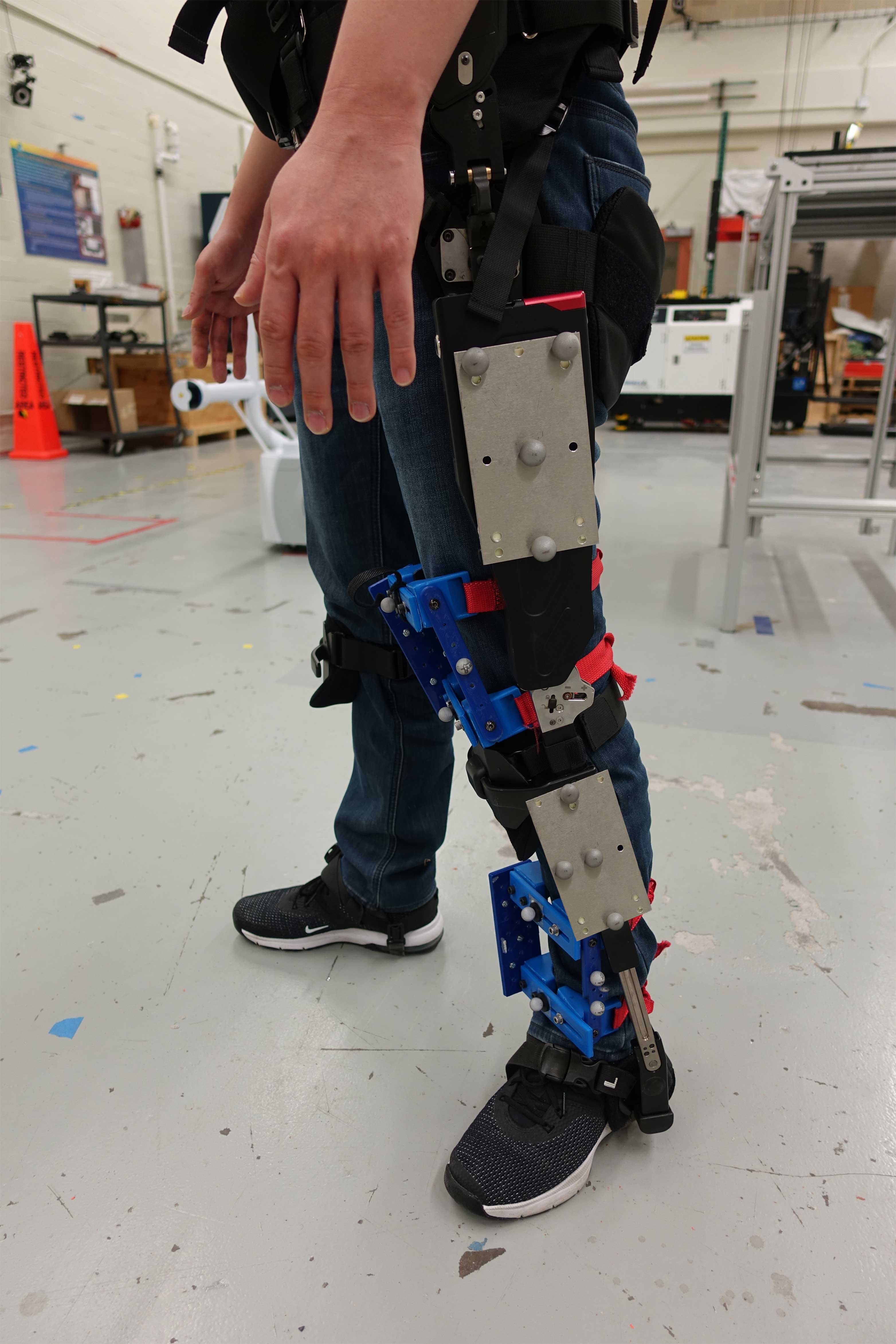 Reflective markers are attached to blue 3D-printed apparatus above and below the user’s knee as well as two metal plates on the exoskeleton leg. Researchers track and compare the movement of the markers to gain insight into how well the exoskeletons fit. In this composite photo, the bottom plate has been added after the original image was taken to show the entire configuration.
Credit: N. Hanacek/NIST

A shoddily tailored suit or a shrunken T-shirt may not be the most stylish, but wearing them is unlikely to hurt more than your reputation. An ill-fitting robotic exoskeleton on the battlefield or factory floor, however, could be a much bigger problem than a fashion faux pas.

Exoskeletons, many of which are powered by springs or motors, can cause pain or injury if their joints are not aligned with the user. To help manufacturers and consumers mitigate these risks, researchers at the National Institute of Standards and Technology (NIST) developed a new measurement method to test whether an exoskeleton and the person wearing it are moving smoothly and in harmony.

In a new report, the researchers describe an optical tracking system (OTS) not unlike the motion capture techniques used by filmmakers to bring computer-generated characters to life.

The OTS uses special cameras that emit light and capture what is reflected back by spherical markers arranged on objects of interest. A computer calculates the position of the labeled objects in 3D space. Here, this approach was used to track the movement of an exoskeleton and test pieces, called “artifacts,” fastened to its user.

A new publication by cryptography experts at the National Institute of Standards and Technology (NIST) proposes the direction the technical agency will take to develop a more secure approach to encryption. This approach, called threshold cryptography, could overcome some of the limitations of conventional methods for protecting sensitive transactions and data.

The document, released today in a final version as NIST Roadmap Toward Criteria for Threshold Schemes for Cryptographic Primitives (NISTIR 8214A), offers an outline for developing a new way to implement the cryptographic tools that developers use to secure their systems. Its authors are inviting the cryptography community to collaborate with them on NIST’s budding Threshold Cryptography project, which in part seeks to ensure that threshold implementations are interoperable.

“We are kicking the threshold cryptography development effort into high gear,” said Apostol Vassilev, a NIST computer scientist. “Over the coming months, the Threshold Cryptography project will be engaging with the public to define criteria for this work. We want to get feedback from the community so we can consider a variety of threshold schemes and standardization paths.”

Threshold cryptography takes its name from the idea that individual keyholders cannot open a lock on their own, as is common in conventional cryptography. Instead, out of a group of keyholders, there must be a minimum number of them — a “threshold” number — working together to open the lock. In practice, this lock is an electronic cryptosystem that protects confidential information, such as a bank account number or an authorization to transfer money from that account.

Small enough to fit on a chip, miniature versions of these combs — so named because their set of uniformly spaced frequencies resembles the teeth of a comb — are making possible a new generation of atomic clocks, a great increase in the number of signals traveling through optical fibers, and the ability to discern tiny frequency shifts in starlight that hint at the presence of unseen planets. The newest version of these chip-based “microcombs,” created by researchers at the National Institute of Standards and Technology (NIST) and the University of California at Santa Barbara (UCSB), is poised to further advance time and frequency measurements by improving and extending the capabilities of these tiny devices.

The National Institute of Standards and Technology (NIST) has evaluated several commercially available contactless fingerprint scanning technologies, allowing users to compare their performance to conventional devices that require physical contact between a person’s fingers and the scanner.

The publication updates NIST’s July 2018 study on contactless capture and is intended to assist organizations that use fingerprint-scanning technology.

Quantum physics drives much of the research at the National Institute of Standards and Technology (NIST). Explaining this research is a challenge, because quantum physics—nature's rules for the smallest particles of matter and light—inspires words like weird, curious, and counter-intuitive. The quantum world is strange and invisible in the context of everyday life. And yet, quantum physics can be explained and at least partially demonstrated visually.
NIST physicist Ray Simmonds recently collaborated with MFA graduate candidate Sam Mitchell of the University of California, San Diego (UCSD), to create a dance piece based on the laws of quantum physics. The piece, Dunamis Novem (Latin for "the chance happening of nine things"),* premiered at The La Jolla Playhouse Forum Theatre in January, as a part of Mitchell's thesis work.
The project has practical benefits such as education, Simmonds says.
"While quantum mechanics is a well-established theory, proven true overwhelmingly by experiments, it is still confounding to most people, even those in science," Simmonds and Mitchell noted in describing their work.
“Quantum Statistics: Affects on Human Dancers and the Observer”
Abstract
The Arts and Sciences may seem to be immiscible fields of study, even at odds with each other. In Leonardo Da Vinci’s time these two fields were not polarized, in fact, they coexisted naturally. Despite the appearance of being far distant cousins, both artists and scientists share a creative gene, a passion for their work, and a brave curiosity that pushes them past current boundaries to explore the unknown. In this lecture, we will present some recent examples of those mixing these two worlds and our own attempts to do so with Dance Theater and Quantum Physics. While quantum mechanics is a well-established theory, proven true overwhelmingly by experiments, it is still confounding to most people, even those in science. At its heart, it describes nature in terms of possible realities with probable outcomes, with almost no predictable certainty. Experts still struggle to interpret its philosophical consequences and the notion that there may be no “objective reality”. Even Albert Einstein, one of its co-creators, disapproved of its bizarre properties, saying that “God does not play dice with the universe”. In the creation of this work, “Dunamis Novem”, we have taken some of the probabilistic rules that govern quantum systems and integrated them into a creative process. The results are then born from an artistic aesthetic and an algorithmic code that produces dynamics that embody in some way randomness, concepts of “quantum entanglement”, and the effects of observation or “measurement”. Our work shows that “Science” can inspire and direct new forms of “Art”, and we hope that the liminal world of “Art” can be an effective medium to transmit the sometimes counterintuitive results of empirical “Science” to a broader audience, also generating a dialogue between the two. We will describe the scientific concepts that currently inspire us, the process by which we convert quantum principles into movements, and the challenges of distilling this into a theatrical setting.

By confining single ions of aluminum and magnesium in an electric trap, cooling them to near absolute zero and probing them with laser beams, physicists at the National Institute of Standards and Technology (NIST) in Boulder, Colorado have built what is in effect the world’s most accurate clock. Having fractionally improved on the performance of another clock at NIST, the researchers have shown that their device would neither gain nor lose a second in 33 billion years (if it could run for that long). Such accurate timekeeping, they say, could boost geodesy and lead to new insights in fundamental physics.
The clocks that currently underpin atomic time rely on precisely measuring the frequency of microwaves emitted during a specific transition in cesium atoms. But such devices are limited by the relatively low frequency of that radiation. To keep time even more accurately, and eventually introduce a new definition of the second, physicists are developing clocks based on higher-frequency optical transitions.
The latest work at NIST features what is known as a quantum-logic clock. Built by Samuel Brewer and colleagues, it uses a positive ion of aluminum-27 as its timekeeper. When exposed to ultraviolet laser light at wavelength 267 nm, the ion undergoes a transition with a very narrow line width – making its frequency very well defined. What is more, that transition is largely immune to sources of external noise – such as blackbody radiation – that in other types of optical clock shift the frequency away from its true value.
A magnesium-25 ion is used to cool the aluminum down to the very low temperatures needed to minimize thermal noise. Cooling involves the absorption of photons at another specific frequency, but practical limitations mean that this cannot be done using the aluminum itself. This is because the required frequency in is too high for any practical laser. By entangling the two ions, the magnesium cools the aluminum via Coulomb interactions. This process also allows the quantum state of the aluminum ion to be read-out following exposure to the clock laser.