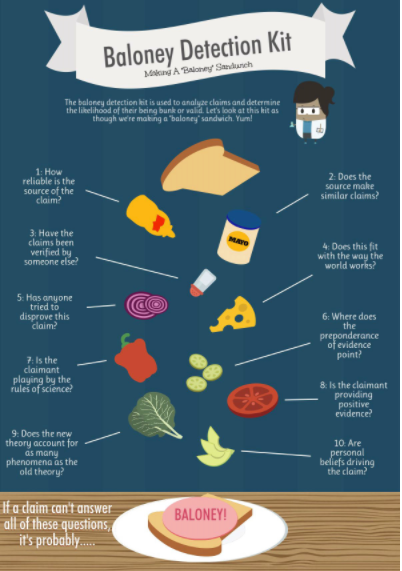 Derived from Carl Sagan in "The Demon-Haunted World: Science as a Candle in the Dark," on Skeptic.com: Baloney Detection Kit Sandwich (infographic)

"The human understanding is no dry light, but receives infusion from the will and affections; whence proceed sciences which may be called 'sciences as one would.' For what a man had rather were true he more readily believes. Therefore he rejects difficult things from impatience of research; sober things, because they narrow hope; the deeper things of nature, from superstition; the light of experience, from arrogance and pride; things not commonly believed, out of the deference to the opinion of the vulgar. Numberless in short are the ways, and sometimes imperceptible, in which the affections color and infect the understanding." Sir Francis Bacon, NOVUM ORGANON (1620)

"A clairvoyance gap with adversary nations is announced, and the Central Intelligence Agency, under Congressional prodding, spends tax money to find out whether submarines in the ocean depths can be located by *thinking hard* at them."

Both quotes from "The Demon-Haunted World: Science As A Candle in the Dark," chapter 12 - "The Fine Art of Baloney Detection," Sir Francis Bacon's quote is in the chapter intro.

Writing a physics and nano blog, one wants the audience (be they somewhat limited), to catch on to the central theme of the weblog: science, and the promotion of science literacy, for citizens of this country, and since this is the web, Earth.

SCIENCE IS FOR ALL STUDENTS. This principle is one of equity and excellence. Science in our schools must be for all students: All students, regardless of age, sex, cultural or ethnic background, disabilities, aspirations, or interest and motivation in science, should have the opportunity to attain high levels of scientific literacy.

Scientific literacy implies that a person can identify scientific issues underlying national and local decisions and express positions that are scientifically and technologically informed.

This blog is a continuing, meaningful discussion about scientific and technological literacy (STL), and its importance in fostering a society of informed citizens – indeed, a prerequisite for participatory democracy – conversant in emerging fields as consumers and eventual future participant contributors. In the language of scripture, I would like to "begat" citizens versed in technology that want to research, discover, and publish in it. For a world so impacted by it, it is imperative we're all versed in it, scientists, engineers, artists, and lay citizens alike.

We have gone through a dizzying four-year experiment with technology and authoritarianism. No less than Foreign Affairs (Does Technology Favor Tyranny?) has studied the impact. It was fostered by a birther lie, and technology (Twitter). Though I doubt the current flailing will change election results, we have a number of citizens, in the words of Tom Nichols, who voted for the sociopath. Some of our fellow citizens "created their own realities" (Karl Rove), or delved into "alternative facts" (Kellyanne Conway). His political party could stop him, but they're too cowardly, afraid of him and his base. Sadly, these are NOT their constituents: most members of Congress are multimillionaires, worth well over the salaries we pay them. They serve, for want of a better term, American Oligarchs (Andrea Bernstein), and the businesses they give endless tax breaks to.

E Pluribus Unum is probably the first Latin phrase you've ever heard, or read: "out of many, one." It's the nation's motto, and poetic, but in the era of news feeds, echo chambers, and social media groups, E Pluribus Multis is more illustrative and quite apropos.

We must depart, somehow, in the next succession of days, from the false empowerment of divisive Multis, into a future fully embracing science literacy, and Unum for the survival of the species. Our baloney detection kits must be tuned to high gear.

“I have a foreboding of an America in my children's or grandchildren's time -- when the United States is a service and information economy; when nearly all the manufacturing industries have slipped away to other countries; when awesome technological powers are in the hands of a very few, and no one representing the public interest can even grasp the issues; when the people have lost the ability to set their own agendas or knowledgeably question those in authority; when clutching our crystals and nervously consulting our horoscopes, our critical faculties in decline, unable to distinguish between what feels good and what's true, we slide, almost without noticing, back into superstition and darkness…

The dumbing down of American is most evident in the slow decay of substantive content in the enormously influential media, the 30 second sound bites (now down to 10 seconds or less), lowest common denominator programming, credulous presentations on pseudoscience and superstition, but especially a kind of celebration of ignorance”

“We've arranged a global civilization in which most crucial elements profoundly depend on science and technology. We have also arranged things so that almost no one understands science and technology. This is a prescription for disaster. We might get away with it for a while, but sooner or later this combustible mixture of ignorance and power is going to blow up in our faces.”

― Carl Sagan, The Demon-Haunted World: Science as a Candle in the Dark

We owe it to Carl's grandkids, and our children's futures, to get this right. 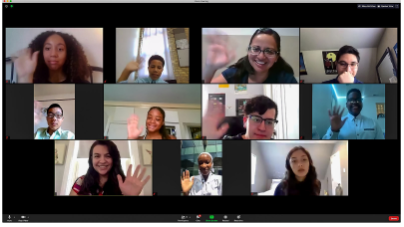 Students and instructors wave bye to each other after the close of a virtual session of All About Energy. (Image by Argonne National Laboratory.)

Argonne Educational Programs and Outreach transitioned to virtual summer programming, ensuring that Argonne continues to build the next generation of STEM leaders.

At the U.S. Department of Energy’s (DOE) Argonne National Laboratory, scientists and educators have found new ways to balance their work with safety needs as the laboratory’s Educational Programs and Outreach Department successfully transitioned all of its summer programming to a virtual learning environment.

“Providing STEM opportunities and a constant presence with our next generation of STEM professions during a time that is unsettling and turbulent for everyone, but especially our school age and university student populations, was our top priority.” — Meridith Bruozas, Educational Programs, and Outreach manager

“Argonne continues to adapt and lead impactful science during the ongoing pandemic, a strategy that includes strengthening the STEM pipeline with unique educational programs for future scientists and engineers,” said Argonne Director Paul Kearns. ​“For years, hundreds of students have pursued summer learning opportunities at Argonne that are not available anywhere else. I’m pleased that in 2020 our lab community came together to maintain these high-quality STEM experiences through a successful virtual program for next-generation researchers.”

Today poignantly, is the 50th anniversary of Earth Day. Some of us celebrate in willing self-isolation; others wish a repeat of the 1918 Influenza Pandemic by callously campaigning for others to die for an economy so wrought with inequality it cannot handle it's centennial equivalent.
A disclaimer note: Though these are unique times to say the least, this is not a support for fully online STEM education, though there can be some. Science for the most part is done in-person. I hope this is a bridge until we get to that again. It's hard to Zoom a breadboard circuit design or a laboratory set up.
Worldwide demand is growing for effective STEM (science, technology, engineering, and mathematics) education that can produce workers with technical skills. Online classes—affordable, flexible, and accessible—can help meet that demand. Toward that goal, some countries have developed national online higher-education platforms, such as XuetangX in China and Swayam in India. In 2015 eight top Russian universities collaborated to create the National Platform of Open Education, or OpenEdu. Professors from highly ranked departments produced courses for the platform that could then be used, for a fee, by resource-constrained universities. The courses comply with national standards and enable universities to serve more students by reducing the cost per pupil.
A new study from Igor Chirikov at the University of California, Berkeley, and his collaborators at Stanford and Cornell Universities and the National Research University Higher School of Economics in Moscow investigates the effectiveness of the OpenEdu program. The researchers looked at two metrics—effectiveness of instruction and cost savings—and found that the platform was successful on both fronts.

Nearly a quarter of a million science teachers are hard at work in public schools in the United States, helping to ensure that today’s students are equipped with the theoretical knowledge and the practical know-how they will need to flourish in tomorrow’s world. Ideally, they are doing so with the support of the lawmakers in their state’s legislatures. But in 2019 a handful of legislators scattered across the country introduced more than a dozen bills that threaten the integrity of science education.
It was a mixed batch, to be sure. In Indiana, Montana and South Carolina, the bills sought to require the misrepresentation of supposedly controversial topics in the science classroom, while in North Dakota, Oklahoma and South Dakota, their counterparts were content simply to allow it. Meanwhile, bills in Connecticut, Florida and Iowa aimed beyond the classroom, targeting supposedly controversial topics in the state science standards and (in the case of Florida) instructional materials.
Despite their variance, the bills shared a common goal: undermining the teaching of evolution or climate change. Sometimes it is clear: the one in Indiana would have allowed local school districts to require the teaching of a supposed alternative to evolution, while the Montana bill would have required the state’s public schools to present climate change denial. Sometimes it is cloaked in vague high-sounding language about objectivity and balance, requiring a careful analysis of the motives of the sponsors and supporters.
Either way, though, such bills would frustrate the purpose of public science education. Students deserve to learn about scientific topics in accordance with the understanding of the scientific community. With the level of acceptance of evolution among biomedical scientists at 99 percent, and the level of acceptance of climate change among climate scientists not far behind at 97 percent, it is a disservice to students to misrepresent these theoretically and practically important topics as scientifically controversial.